How to Spend 24 Hours In Quito, Ecuador 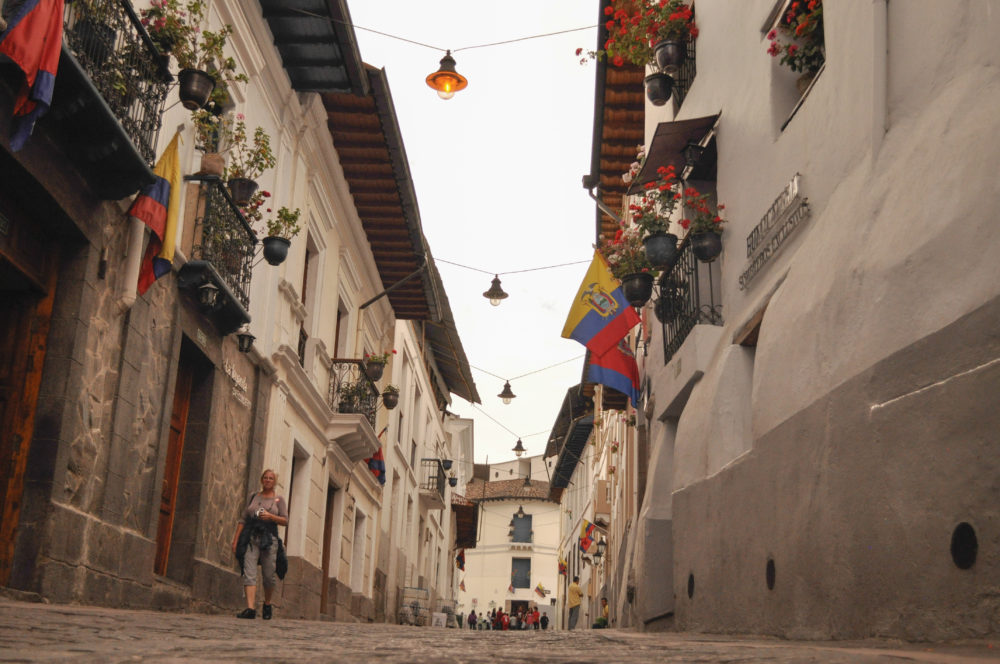 Quito, the UNESCO-listed capital city of Ecuador, has colonial history, volcanoes, leafy plazas and 1,000 flavours of ice cream! Here’s how to see it all in 24 hours.

Why you shouldn’t miss Quito on a visit to Ecuador

Take a selfie standing on the Equator or frolic with wildlife on the Galapagos Islands, but whatever you do while in Ecuador, don’t overlook the capital.

Quito is one of the most beautiful cities in South America. The Spanish founded Quito in 1534 on the ruins of an Inca City. It has a dramatic setting along the slopes of the Pichincha Volcano.

Ideally you need several days to see all the main attractions, but if you’re short on time here’s a suggested 24-hour itinerary to get you started.

The fact that Quito has one of the most extensive and best-preserved historic centers of Spanish America should be reason enough to want to spend some time here.

Named a UNESCO World Heritage Site in 1978, the city is crammed with centuries-old churches and colonial-era buildings set around elegant plazas that make it a wonderful place to stroll. 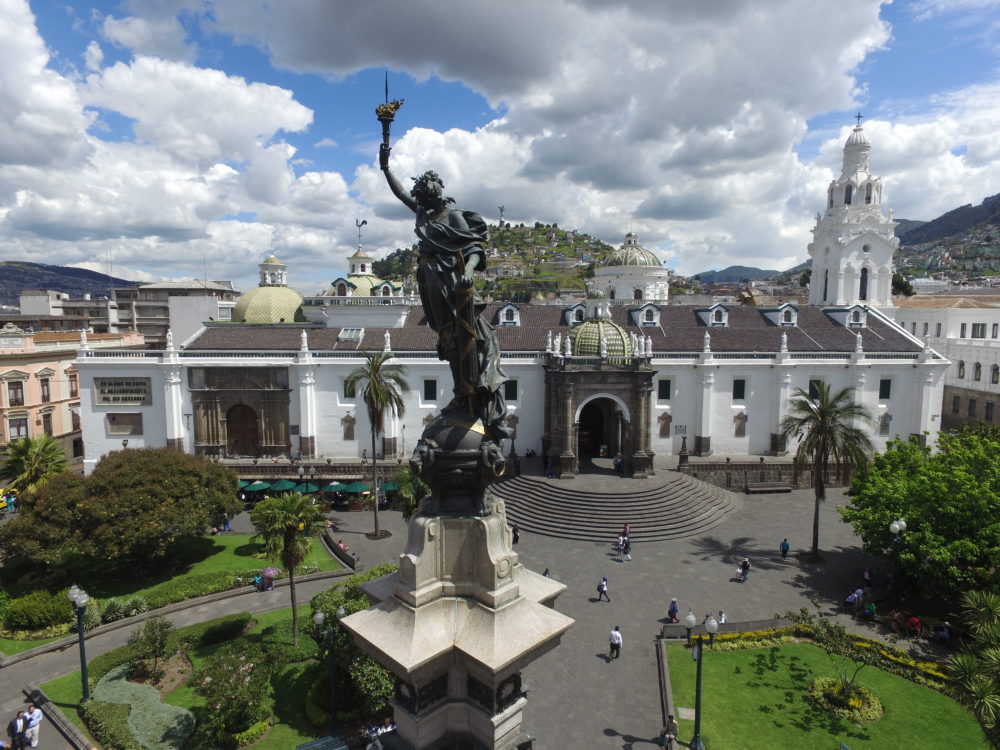 Pick up a map from the tourist office and head to the Old Town where you can take a tour of the Presidential Palace. See some of the most impressive 16th to 19th century art at Museo Fray Pedro Gocial. Or enjoy views of the historic city from the country’s tallest church: the Basilica del Voto Nacional.

It’s not enough to admire Quito’s churches from the outside.

Case in point is La Compania. Sometimes called the Gold Church, it positively shimmers with the amount of gold leaf embellishments on almost every interior surface. 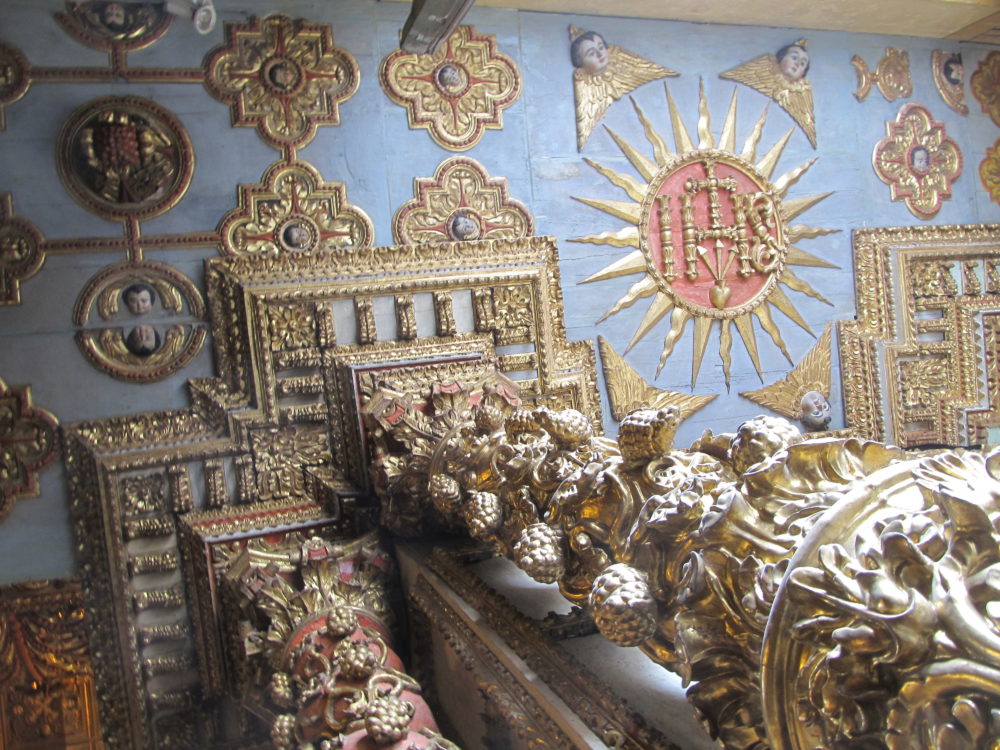 Construction of the Jesuit church, sometimes called “Quito’s Sistine Chapel,” began in 1605 and took eight generations of indigenous people over 150 years to complete! The church is notable for its symmetry, as well as its Baroque and Moorish (especially the ceiling) styles and indigenous influences.

Near the entrance is a replica of a famous painting depicting hell, where sinners receive excruciating punishments, while under the altar are the remains of Quito’s first saint, Santa Mariana de Jesus.

The real home of Panama hats

Of all Ecuador’s extraordinary handmade crafts, perhaps none is more famous than the toquilla straw hat, better known as the Panama hat. (So named because they were provided to workers building the Panama Canal).

Panama hats are actually made in Ecuador. The hats gained a following after U.S. president Theodore Roosevelt was photographed wearing one in 1906 while visiting the canal’s construction site.

It’s worth noting that UNESCO has inscribed Ecuador’s toquilla straw hat on the list of Intangible Cultural Heritage of Humanity.

There’s some serious craftsmanship involved. The best quality ones, the superfinos, are made in the town of Montecristi. Their weave is so fine they can hold water without a leak. They can also fold in your pocket without creasing. Skilled artisans weave the hats using fibres from a palm tree found on the Ecuadorian coast. 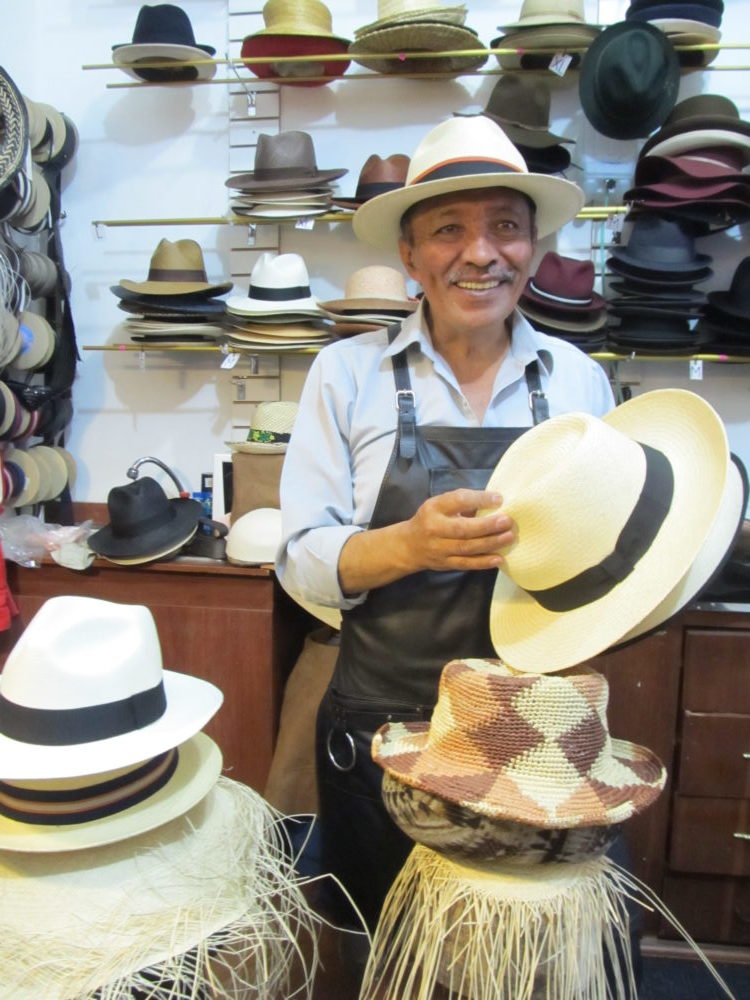 At the Casa Montecristi shop on Sucre Street, you can see the raw material. Learn how the fibres are boiled, dried, split then boiled and dried again before they’re ready for weaving. It can take anywhere from a day to more than a year to weave a hat, depending on the quality and finesse. There’s a wide selection for sale here ranging in price from USD $100 to $10,000.

If you’re wondering how to tell an authentic Panama Hat from a fake, bend the hat near your ear. If it doesn’t make a sound, that’s the real deal!

Bordering the southwest corner of sprawling San Francisco Plaza is Casa Gangotena. It’s a boutique hotel and restaurant where you can enjoy a tasty lunch (ceviche starter recommended) in an elegant setting.

Several Republican-era presidents once lived in a home on this site until it was destroyed in a fire. The influential Gangotena family then erected a mansion on the spot in 1924. When they sold it, the new owners converted it to one of the city’s finest hotels.

Note the many Art Nouveau and Art Deco elements, antiques, original murals, friezes and Egyptian marble. Before you leave, head to the third-floor terrace for views of the surrounding mountains and volcanoes and church domes and towers below.

There are plenty of statues of the Virgin Mary around the world, but the one on top of El Panecillo hill in Quito has wings! 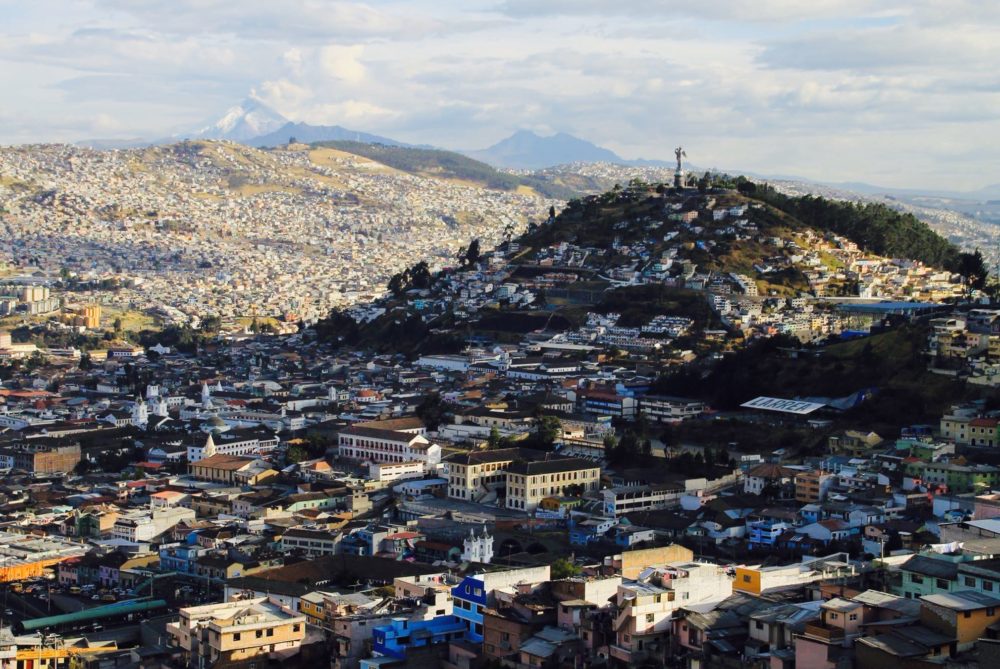 From a distance she appears like a guardian watching over the city. Spanish sculptor Agustín de la Herrán Matorras designed and built her. Installation commenced in 1975. The landmark is particularly impressive up close.

Take a taxi to the top of the hill, whose name translates as “little loaf bread”. Gaze up at the 67-metre tall sculpture made from more than 7,000 pieces of aluminum.

Quito’s Bernardo de Legarda created the original winged virgin in 1734. You’ll find it on the main altar of the San Francisco church. The Bible’s Book of Revelation inspired him. It describes a pregnant virgin walking in the desert chased by a demon. Apparently he understood the woman to be the Virgin Mary and decided to give her wings in order to escape. 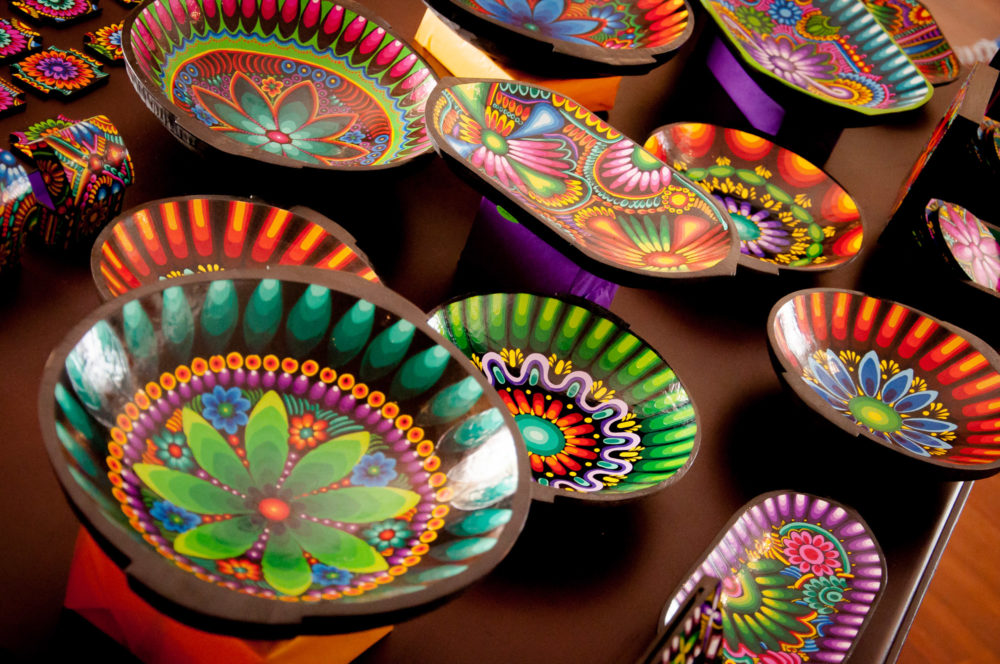 It’s also popular with intellectuals, poets and musicians. They often serenade beneath second-floor balconies in hopes their amor will emerge.

Stop for ice cream at Dulce Placer. In high season they boast about 1,000 flavours, including many you’ve likely never tried before. Among them are chochos (Andean bean), canguil (popcorn), colada morada (a spiced berry drink), banana/strawberry, and salted peanuts. One section has flavours imbued with alcohol and inspired by famous cocktails such as margarita, sangria and mojito. But the oddest of all has got to be caca de perro (dog poop). They make it with corn, brown sugar and barley fried together! 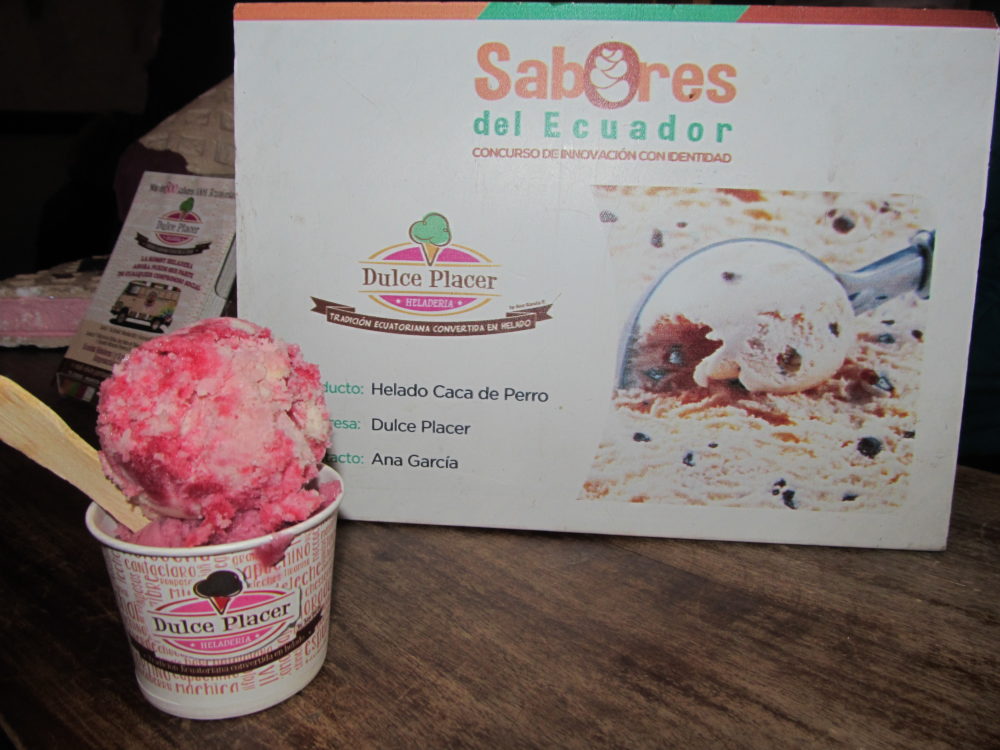 You couldn’t do better than bunk for the night at this charming, renovated Spanish colonial house. It opened just over a year ago as a boutique hotel. It’s five-star accommodation on a tranquil part of Vicente Rocafuerte street. It’s within easy walking distance of major attractions such as Plaza Santo Domingo and La Ronda.

Rooms face a central light-filled courtyard that doubles as La Plaza restaurant. Here you can try a gourmet interpretation of homemade Ecuadorian dishes from 13 of the country’s 17 regions. 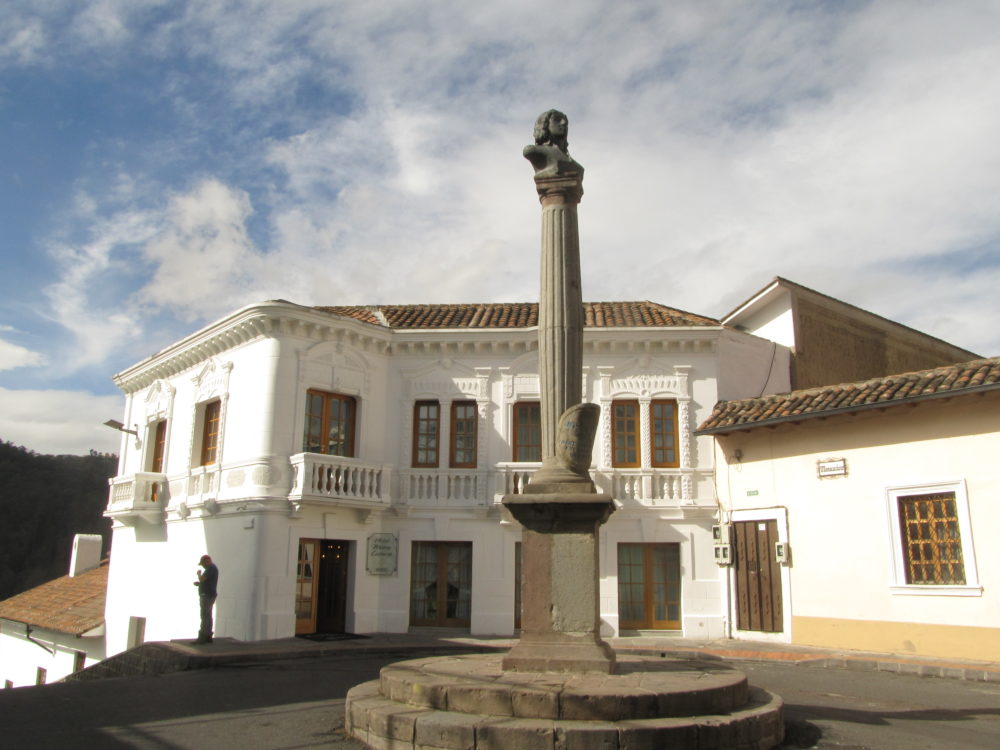 If you don’t have time to visit any galleries on your trip, admire the hotel’s private art collection. It includes paintings and sculptures, complemented by rotating exhibits of various Ecuadorian artists. Exquisite fresh flower arrangements and attentive service complete the picture. There’s also a rooftop bar and terrace with a view where you can enjoy the equatorial sunshine by day and twinkling hillside lights by night.

Looking for a new job? Want to improve your love life or get help for a nagging health concern? If so, you may want to locate one of the limpiadoras (herb healers) at the San Francisco market for a spiritual cleansing. 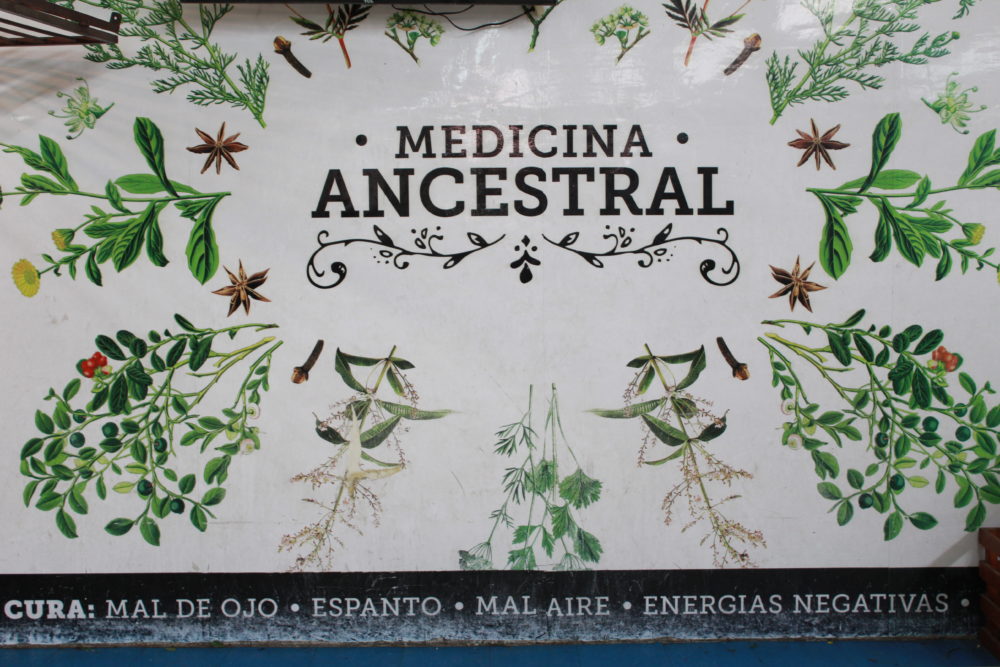 Part of an ancient tradition still practiced in Ecuador, you’ll find several of these female healers at tiny stalls lining a far wall of this fruit and vegetable market.

A visit to these healers starts by stepping behind a curtain and removing your shirt. The healer, who has gathered four different preparations of plants, flowers and leaves from the highlands, will begin her four-step process. With the first bundle of plants in hand and reciting an incantation in rapid-fire Spanish, she begins to brush you front and back in an attempt to remove any bad energy. The second bundle, containing different plants (I detected hints of chamomile and rosemary) is designed to clean your body. The third is to clean your soul. Perhaps the most pleasant is the fourth and final step, which involves a sprinkling of Ecuadorian rose petals mixed with oils derived from various flowers to soothe and re-energize you. 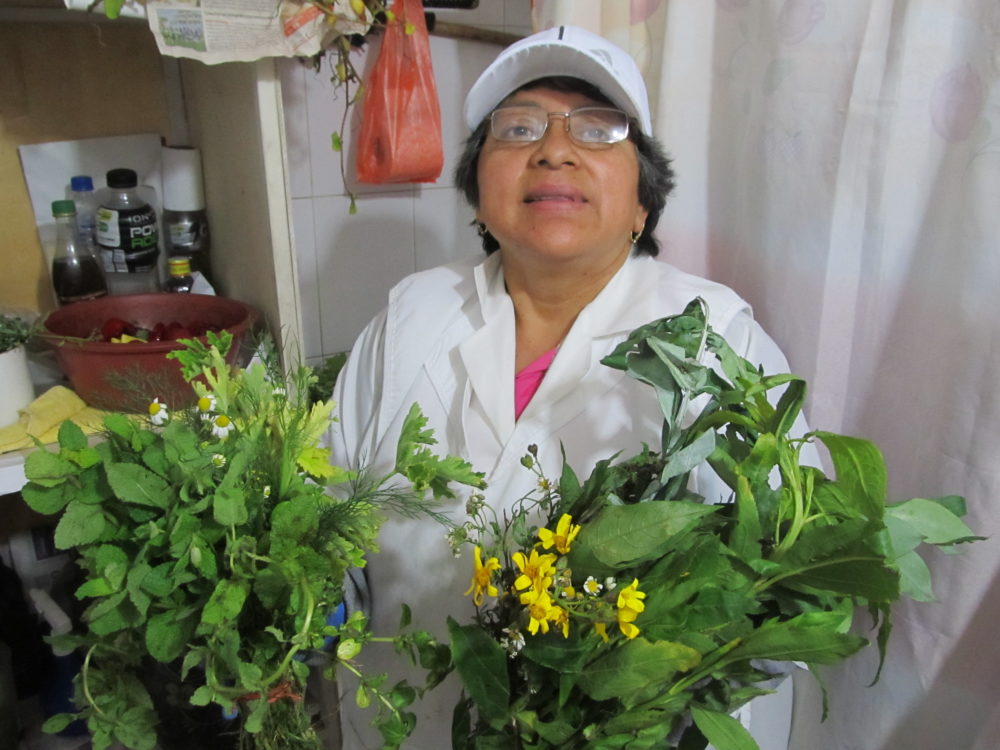 I walked out with reddish arms and a slight prickly sensation (apparently caused by the stinging nettle) but it went away quickly. As the day progressed, I noticed rose petals of various shades occasionally emerging from my clothing. And the pain in my knee that had irked me for weeks? It suddenly vanished.

Aeromexico flies regularly from major Canadian cities including Toronto, Vancouver, Montreal and Calgary to Quito via Mexico City on their 737 800 aircraft. Choose from three classes of service: Business, AM Plus (premium economy) and Economy. Flights include meals, drinks, one free checked bag, free messaging and free earbuds for the entertainment system. There are two lounges to choose from in Mexico City and an award-winning lounge at Quito’s airport. 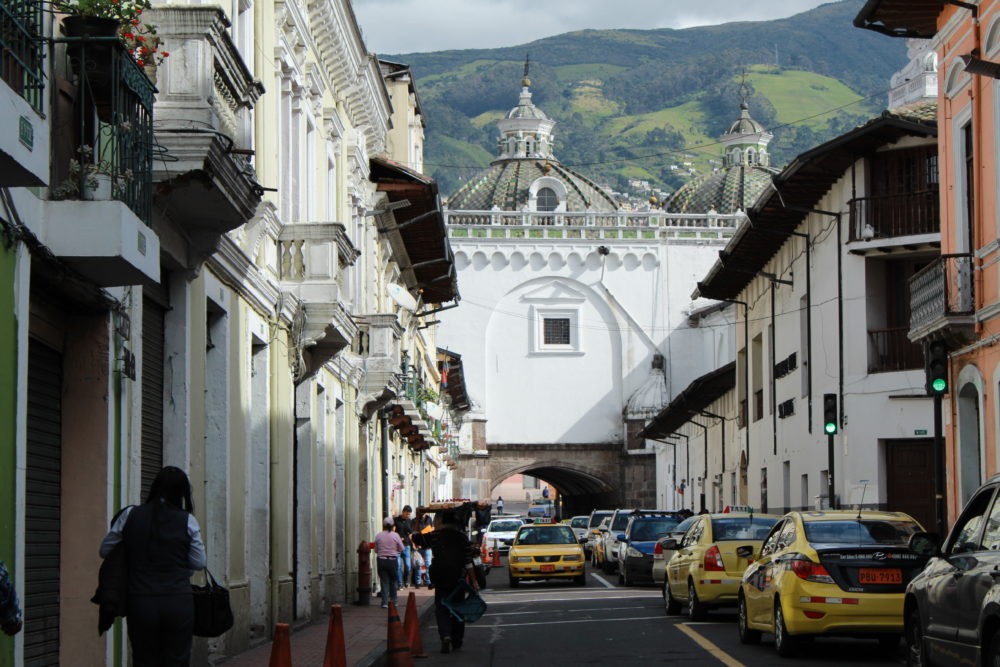 Quito, the world’s second-highest capital, is located 2,850 metres above sea level. So it’s advisable for visitors to walk slowly to adjust to the altitude. Cover up or reapply sunscreen often and drink plenty of water. For more information check out quito.com.ec.

No Responses to “How to Spend 24 Hours In Quito, Ecuador”