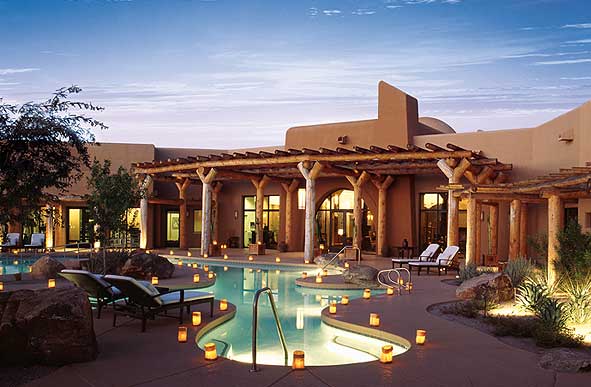 “Welcome to my home, friend,” says the therapist, smiling warmly. “May the Creator be with you.”

It’s not the greeting one expects to hear before a spa treatment. However, I’m at Aji Spa, Arizona’s only Native-American owned spa. Located 30 minutes from downtown Phoenix, the spa is renowned for its authentic Native American healing and wellness offerings, all conceptualized and overseen by tribal elders and cultural caretakers. It’s truly something special.

Aji Spa, which first opened in 2002, is an extension of the Sheraton Wild Horse Pass Resort—an opulent hotel that’s owned and operated by the Gila River Indian Community. Both overlook Gila’s reservation lands, situated on a beautiful tract of desert where wild horses still roam free.

“The vision was to create a resort and spa that share the histories and traditions of the Pima and Maricopa peoples,” says Stephanie Sanstead, the resort’s spokesperson. “It’s a mouthpiece for that story.”

Inside the spa, there are 17 treatment, steam and sauna rooms, a fitness centre, a salon, a watsu pool, and an Olaski, a Native American roundhouse used for meditation, yoga and Pilates classes.

The name “aji” means “sanctuary” in the Pima language, referring to the mountains where women and children sought refuge during wartime. Today, locals and tourists alike flock here to escape life’s stresses, seeking treatments inspired by the ancient legends and the sacred healing traditions of the Pima and Maricopa tribes. 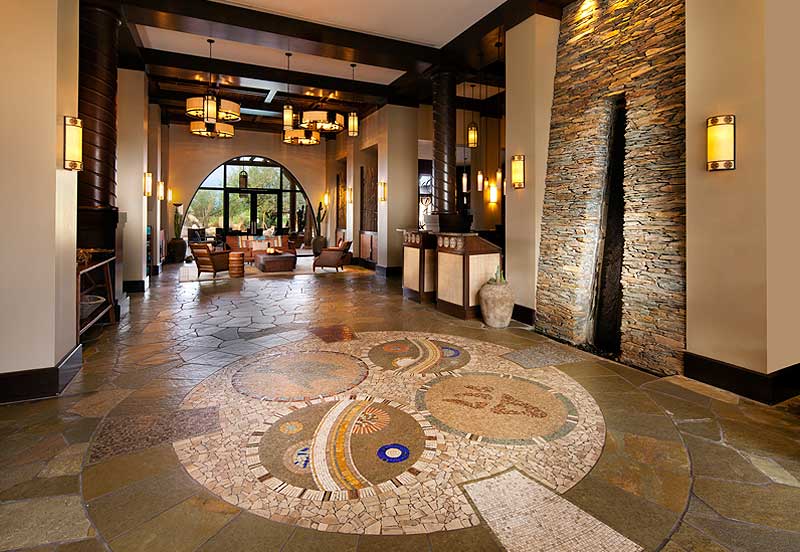 The lobby at Aji Spa

“As with traditional Pima dwellings, the entrance faces east for sunrise,” explains Sanstead. “The back patio faces west, showcasing some beautiful sunsets over the mountain region.”

In the atrium, native flute music plays softly and a luminous mural of twilight and dawn is painted on the ceiling. The hallways are adorned with indigenous artwork, each piece accompanied by interpretive placards. In the café, the image of the Man in the Maze—a sacred icon symbolizing the cycle of life—is depicted within the metal artwork.

These touches hold more than aesthetic value. They’re a concerted effort to revitalize and celebrate Pima and Maricopa cultures, endangered by colonization. For instance, the sacred Gila River has been recreated on the grounds to honour a 100-year struggle for indigenous water rights.

“Water is really important in this story,” says Sanstead. “The Pima and Maricopa peoples were involved in the largest and longest water settlement in United States history.”

Once the life-blood of communities, the river dried up to a trickle as settlers built diversions and dams in the late 1800s. Without a water source, local indigenous nations suffered drought, starvation and poverty. Amazingly, the communities survived this dark chapter and recently won rights to Arizona’s water. Today, there’s an especially picturesque view of the replica Gila River from the spa’s
outside patio.

The healing journey begins
Visual storytelling aside, cultural teachings are also shared through the spa’s treatments, each developed by Pima and Maricopa cultural caretakers and rooted in traditions passed down from medicine healers.

“Our Indigenous Collection was a collaboration between our spa director, the board of tribal elders and our cultural liaison,” says Sanstead. “We’re always asking: is this sharing the culture authentically?”

For instance, hot rocks have long been used to alleviate pain and soothe the soul, inspiring the Ho’Dai Gila River Rock Massage. Another treatment scrubs the skin anew while recounting the ancient pilgrimage to retrieve salt from the sea. For my session, I choose an 80-minute Blue Coyote Body Wrap, inspired by a Pima legend. As the tale goes, Coyote envied Bluebird’s indigo feathers and bathed in the lake until his fur turned blue.

“But he became prideful,” the therapist says. “While admiring his coat, Coyote slammed into a tree stump, fell to the ground and became covered in dust. To this day, coyotes are the colour of the earth.” After she gently whisks my limbs with a loofah, I climb onto the aromatherapy steam capsule and lie down. “Now, I’ll apply the mask,” she says. “It’s made from desert clay and juniper-sage extract.” Instead of gooey muck, my body is coated with a glossy mud—blue as Coyote’s fur and soft like a nourishing cream. Draping my eyes with a hot towel, the therapist closes the lid over my torso and begins to massage my scalp. Balmy steam flows from the capsule, moistening my skin and lulling me to into a dream-like trance. 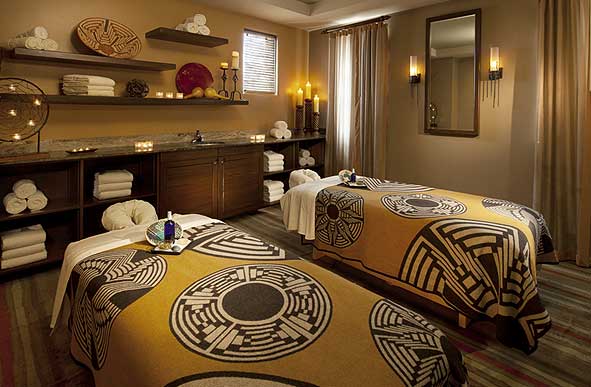 Afterwards in the shower, I can’t stop caressing my silky arms that feel as though they’ve been sandpapered smooth. The treatment ends with a full-body massage using hydrating cedar-sage oil. After kneading my knots from head to toe, the therapist finishes with a gourd rattle blessing and gives me a copy of the Bluebird and the Coyote Legend.

On the way out, I snag a sample of Aji’s body lotion, part of the spa’s line of soaps, lotions and other wellness products made from healing plants. Rubbing cream into my hands, I inhale the earthy aroma of creosote—a sacred plant that smells like desert rain.

Somehow, taking home this little piece of Aji makes parting less sorrowful. But, as Sanstead reminds me, it’s not the only memento from my visit. “You get an appreciation for the Pima and Maricopa cultures at Aji,” she says. “If visitors go home a little more enlightened, it’s a beautiful approach.”

Lisa is a food and travel writer based in Hamilton, Ontario. Aside from regularly contributing to Travel Life, her work has appeared in The Globe and Mail, Toronto Star, The Independent UK, Saveur, CAA Magazine, Huffington Post Canada, Delta Sky Magazine, WestJet Magazine, iNews UK, Time Out, Fodors, The Food Network Canada, and many others.

No Responses to “Cultural healing at Arizona’s Aji Spa”