On display: Artistic identity in Hong Kong and Taiwan 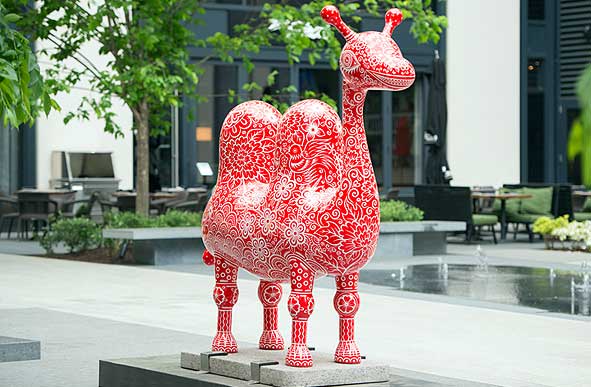 Perhaps the most iconic image of Hong Kong—that bright, colourfully lit skyline reflected in the water at night or set in juxtaposition with the mountains behind—reminds us that Hong Kong is one of the most booming international business and financial centres in the world.

As the economic gateway to Asia, it is a city teeming with activity at all hours. But the towering skyscrapers aren’t where this metropolis truly comes alive. For that you’ll need to come back down to street level where the scale of life can be measured one back alleyway at a time; where the only thing needed to realize a dream is a blank wall and a paintbrush.

Hong Kong’s trendy Poho neighbourhood and the district of Sheung Wan is where you’ll find some of the best street art, everything from impromptu scribbles to expansive murals. Here, too, live the designers and artists who occupy the little boutiques and art galleries that give this area its vibrant character. A mixture of steep hills, narrow streets and lack of public transport make the neighbourhood largely pedestrian, adding to its vitality and retaining that feeling that you’ve stumbled across a hidden treasure—fitting, as “po” means treasure in Chinese.

Similarly in Taipei, a city once known only for its high-tech manufacturing, the capital is quickly being recognized as one of the top arts and culture hubs in Asia. Several sites, like Huashan 1914, The Red House, and Songshan Cultural and Creative Park, have taken over old industrial complexes (a wine factory, a public market and a tobacco factory, respectively), transforming them into stylish and thriving creative centres. These hotspots support the theatre, art and design worlds, and play host to events and festivals that celebrate both local and international creative arts.

The artistic vigour coursing through Hong Kong and Taiwan today may in part be fed by each region’s challenging historic relationship to mainland China, Britain and Japan, and the identity struggles that came along with it. The desire to create artefacts of culture that would define these places as distinct from their tumultuous ancestry and give their inhabitants an independent voice has driven the evolution of artistic expression. Ideals
of freedom, progressiveness, innovation and modernity bubble under the surface of Hong Kong and Taiwan’s thriving art scenes. The drive to push artistic boundaries and support creative expression is culturally paramount.

From alleys to art galleries, there’s no better time to immerse yourself in the creativity that’s shaping the dynamic life and identity of Hong Kong and Taiwan today. Here are a few worth checking out.

PMQ
35 Aberdeen Street, Central
Built in 1951 as the Police Married Quarters, this large complex of dwellings has been converted into a space for artists and designers. PMQ bills itself as “a place for creative lifestyle experiences” that helps to foster business viability for Hong Kong’s
“create-preneurs.”

HKWalls Festival
Various locations in Hong Kong
Now in its fourth year, HKWalls is a non-profit that organizes an annual street art
festival in March. The festival brings together local and international artists in a
coordinated effort to beautify shabby or neglected neighbourhoods in a way that deepens connections between artists and communities. Art lovers are staying tuned for 2018’s location.

Soho Gallery Tour
Yan Gallery, 1 Hollywood Road, Central
Accidental Art’s Soho Gallery Tour is a fantastic introduction to the world of Hong Kong’s contemporary art scene. Accidental Art is a Hong Kong-based art promotion platform that organizes regular art walks and events. This is a way to dive in deep and understand the inner workings of the gallery system, important history and trends in the art world, and you’ll even learn how galleries survive financially and how art is priced for auction.

Bibo Restaurant
163 Hollywood Road, Sheung Wan
Bibo serves innovative French food in an art gallery setting with works by some of the most well-known artists in the world, such as Damien Hirst and Banksy. A spectacular art collection and an extensive wine list make this the perfect dinner reservation for those who know how well art and gastronomy go together.

Treasure Hill Artist Village
No. 7 Beiping East Road, Taipei
This former squatter community once provided a refuge for war vets fleeing mainland China and the Chinese National Par ty. Treasure Hill Artist Village is an eclectic cluster of buildings, now filled with artists’ residences and studios. This place, where green space, art and history are interwoven, feel like another world.

Songshan Cultural and Creative Park
No. 133 Guangfu South Road, Taipei
This historic site used to be a tobacco factory during the Japanese occupation of Taiwan in 1937 and typifies the Japanese early modernist architectural style. Today, the
Songshan Cultural and Creative Park is a space dedicated to fostering creative interdisciplinary collaboration free from the complications of commercialism. Visitors can enter the par k for free, while there is an admission fee for special events, exhibitions and performances.

Huashan 1914
No. 1 Bade Road, Zhongzheng, Taipei
In a similar vein, this impressive complex, built in 1914, used to be a wine production facility through the 1920s, but spent a good chunk of its history abandoned. Huashan 1914 is one of Taipei’s best-preserved old buildings. Following a succession of curious artists and performers sneaking in to take advantage of the tall ceilings, open spaces and abundance of natural light, the site was finally officially developed into a dedicated
creative centre in 2007.

The thriving art and cultural scenes in Hong Kong and Taiwan today represent a kind of coming of age for these unique regions with long histories of occupation by other nations and cultures. New creative voices are rising and the rest of the world is discovering they have something very compelling to say.

Digital editor at Travel Life
Nicola is an international award-winning writer, editor and communication consultant based in Toronto. She has travelled to 32 countries so far and is always poised to head out the door again. Nicola loves both the visceral and intellectual dimensions of travel, and will passionately argue for its psychological paybacks, especially after a few glasses of wine. In addition to being the digital editor at Travel Life, she has written for the Toronto Star, WestJet magazine, Air Canada's enRoute magazine, Time Out magazine and many more. She lives for opportunities to illuminate the life-changing power of travel for as many people as possible.

No Responses to “On display: Artistic identity in Hong Kong and Taiwan”