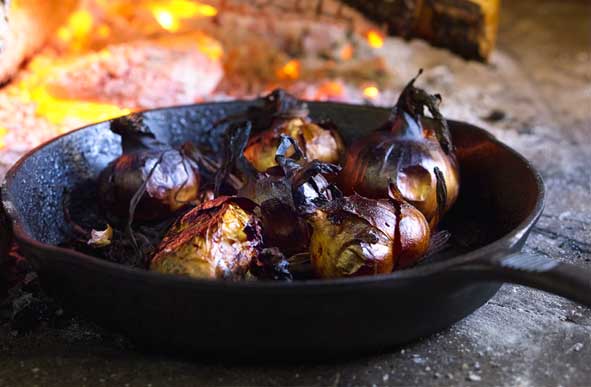 Acclaimed chefs at restaurants across the country are literally playing with fire. This is not so much a new trend as it is an old tradition. Inspired by the mystique, the romance and the warmth of open flames, chefs are casting aside traditional gas and electrical appliances for solid fuel cooking.

Here are four Canadian chefs who are going back to their roots to produce innovative cuisine using locally sourced ingredients. Each uses his or her own brand of creativity and passion to produce memorable meals over the elegance of an open fire. 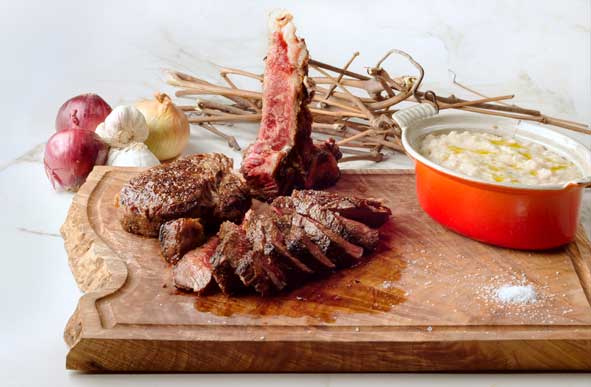 Mark Perrier’s restaurant Savio Volpe, located in the up-and-coming Fraserhood district
of Vancouver, is styled after a classic Italian osteria and serves what Perrier describes as uncomplicated rustic Italian fare.

Almost every dish has in some way been touched by the live fire and smoke of the wood grills, says Perrier, even their pastas. For example, onions are sometimes buried in the coals overnight to roast and caramelize, and are then puréed, mixed with potato and used to stuff ravioli.

The restaurant’s open-fire grill and rotisserie, fuelled exclusively by 100 per cent Okanagan apple wood, sit at the centre of the open kitchen. “We wanted to made sure you could see the fire no matter where you are sitting, blurring the lines between the dining room and the kitchen,” says Perrier. This way, guests could enjoy the warmth and glow of the fire, and relax, “like they are at a friend’s house,” he says.

Perrier has fond memories of smelling wood smoke and the elemental quality of cooking over a fire.

“I grew up camping, hunting and fishing in the interior of B.C. and spent a lot of time cooking over and enjoying campfires,” Perrier says. He also recalls a memorable meal at Chez Panisse in San Francisco many years ago where much of the menu was cooked over a wood fire.

Since then, he had longed to recreate the same feeling of warmth and nostalgia. By all accounts, he’s succeeded. 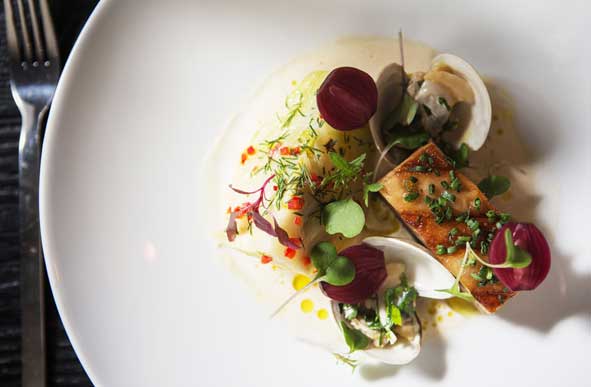 The Berlin – photo by The Berlin

Formerly the executive chef at the luxe Langdon Hall in Cambridge, Ont., chef Jonathan Gushue has recently renounced the stately manor for a funky restaurant with a 20-foot-high ceiling on the main strip of small-town Kitchener, Ont. There are no white tablecloths here, nor the prices you would find for fine dining in a large city. But, you can expect extraordinarily fine cuisine, which makes a meal there well worth the one-hour drive from Toronto.

Gushue speaks passionately about his wood-fired grill, which he says allows him room to
experiment. He can take the knowledge he gained from his classic French training, where
he learned “the science of cooking,” how things are going to reach the flavour profiles or “flavour library,” and now, literally, play with fire.

“People have the perception that cooking over coals is more aggressive,” Gushue says. “It’s quite the contrary.” At its centre, the heat is about 700 to 800 degrees. Two inches out, it’s 400 degrees. Move over another four inches and it’s about 200 degrees, he explains.

The hearth at The Berlin is only about six feet wide, and seemingly innocuous at the back of his open-concept kitchen, but it’s the cornerstone of his cooking, where the mantra is “low and slow.” On a Friday night in December, Gushue is on his game. He moves with focus and purpose, leaning in to offer advice to one of his staff, pausing briefly to plate parsnip ravioli in cipollini and cider broth, and then calling “service” so his wait
staff can whisk the plate away. 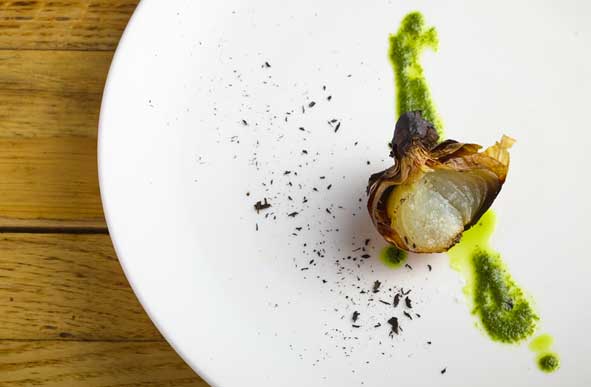 Sommelier and chef Ryan Crawford and his wife Beverley Hotchkiss had a unique vision when they opened their restaurant Backhouse in a strip mall located a kilometre off from the main street of Niagara-on-the-Lake.

“There is no divide, no wall between the kitchen and dining room,” says Crawford. The back of the house is part of the front. Guests are even invited to move between the two—they’re asked to come back and roast their own marshmallows on the wood fire to conclude their dining experience.

Stepping inside this intimate, 65-seat restaurant, guests are immediately plunged into its warm interior, which is dominated by an antique-style wood fire oven and grill set back only slightly from a wrap-around chef’s counter. The restaurant uses all local ingredients, much of them from the couple’s three-acre farm and uses mostly Niagara peach
wood to fuel their fires. This is all part of their “integrated, cool, climate cuisine,”
says Crawford. Kitchen staff not only work with what is available nearby, they help out on the farm, whether digging up potatoes, or planting, weeding or picking up rocks.

Crawford and Hotchkiss also use root cellar storage, as well as pickling, preserving, fermenting and other storage techniques to be able to use local produce throughout the entire year, even in cold weather. “We started the winter with about 1,500 pounds of squash, 600 pounds of potatoes and 500 pounds of onions in our root cellar,” says Crawford.

The buzzword here is sustainability. Crawford attributes his interest in open-fire cooking to enjoying the “simplistic approach” of cooking in a fireplace that he experienced when apprenticing for renowned chef Michael Stadtländer.

Crawford now uses his wood-fired oven to do everything from baking his own sourdough bread, to cooking larger cuts of meats and vegetables, hot smoking hams from a local pig farm, and cold-smoking Kolapore Springs trout caviar in the oven’s hood. 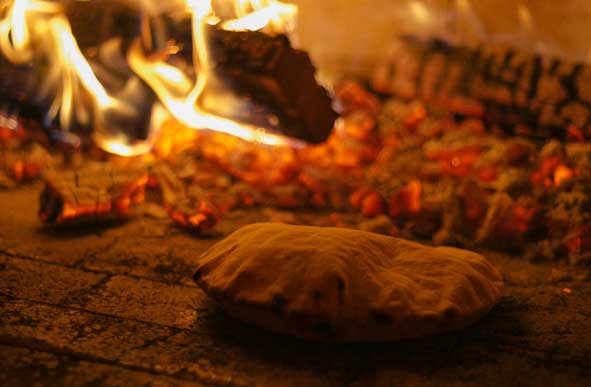 Foxy Restaurant, in Montreal’s up-and-coming Griffintown, is now one of the hot new restaurants in the city, and the latest undertaking from Olive & Gourmando principals Dylan Solomon and Eric Girard.

Here you can expect that everything you eat will have been cooked with fire—whether it’s
been in in their wood-fired oven or barbecued on a grill. “It’s all we do,” says chef Leigh Roper, formerly of Vin Papillon.

Roper says she was really attracted to the flavour an open fire creates, “the romance of
cooking that way,” the smokiness you smell even before you enter and the joy of stoking
a fire. “I had had experience on a grill before, but never a wood-fired oven,” she says. “You’re always watching the fire. It’s your companion. I’d never go back to cooking without it.”

The wood-fired oven at Foxy is used to cook everything from roasted chicken to baked
shellfish, flatbreads and pita breads, and pizzas, while the grill is perfect for items, like steak, sea bass—cooked skin side down so it comes out nice and crispy—grilled Arctic
char and quail, says Roper. She says they also have a shelf inside the wood oven that mimics a salamander: the hottest part of the oven, it’s ideal for charring the outside of roasted Brussels sprouts or finishing a chicken to bring out its crispiness. And sometimes food is cooked right in the coals, whether that’s to caramelize onions, roast mushrooms for a pizza or char a blue steak.

“We do very few traditional stock-based sauces. The kitchen’s not built for that,” she says, referencing its open concept and location at the centre of the restaurant.