Paso Robles: A Wine Region On The Rise

By Diana Ballon |
THE FOODIE FILES
Share the love 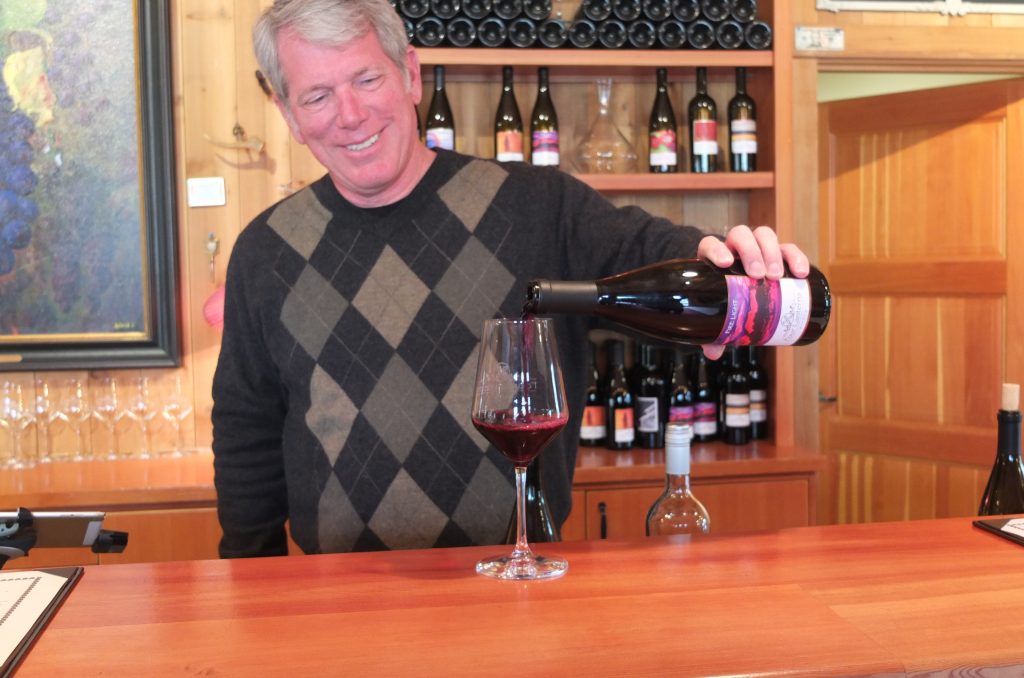 For decades, Sonoma and Napa have been synonymous with California wine. But now Paso Robles, located midway between L.A. and San Francisco in San Luis Obispo County, is the home to more than 200 primarily boutique and family-run wineries that are steadily gaining recognition on the worldwide scene.

In 2013, Wine Enthusiast Magazine rated Paso Robles the number wine region in its international competition. And with the number of wineries quadrupling between 1990 and 2014, it was rated the fastest growing wine region in the United States. Gaining particular attention are Paso’s large bold reds, and its Rhône and Rhône-style blends, although—with 46 different varieties being produced here—the range of wines available are vast, with many innovative blends and some really worthy Zinfandels, which was the first commercially viable wine produced here.

There is something both small and vast about Paso Robles that makes this a wine region worth visiting. Meander along small country roads, past steep hillsides and it won’t be long before you are passing striped fields of grapevines, one closely following the next.

You are unlikely to get caught in traffic and when you do stop for a tasting, chances are you’ll meet the winemaker and a family member or two. Insiders say it’s the way Napa and Sonoma were years ago.

But it’s not just the personalities you meet, but the uniqueness of the terrain and climate that makes for distinctive wines. The region has been able to produce such a range of wine varieties because of its many different mesoclimates and soil types, says Christopher Taranto, communications director for the Paso Robles Wine Country Alliance.

“Paso is a hilly region with lots of calcium-rich soil and ancient seabeds, uplifted over time, making it unique as a growing region,” he says. “It also has a [huge] diurnal temperature swing, with warm days and a nighttime temperature that can be 50 degrees cooler. As a result, photosynthesis and sugar production can occur during the day and then at night, the acidity can settle and the grape skins toughen up, so the fruit has a real balance in it.”

Two-thirds of the wineries in Paso produce under 5,000 cases per year, says Taranto. This makes real distribution or exporting quite limited. So each winery attracts attention by having its own story, making it a bit different from the next guy, he says.

Judy Aron, proprietor of AronHill Vineyards, is one of these winemakers. As she conducts her tasting, she speaks passionately about the wine they produce, making the analogy between winemaking and cooking. 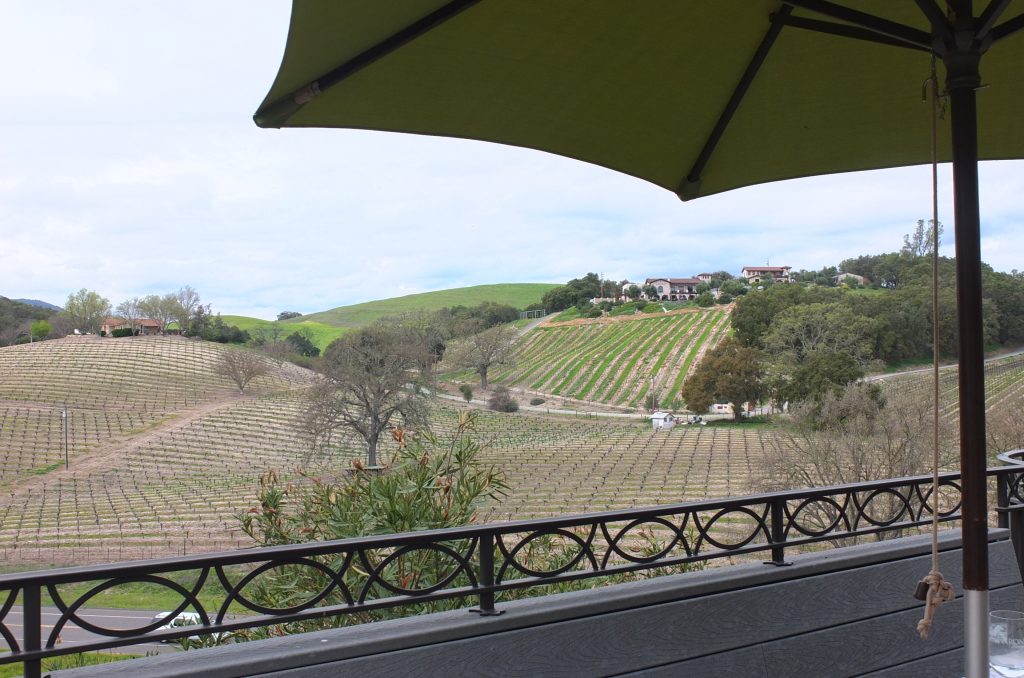 Winemaking “is tasting the essence of the people making it [the wine],” she says. At AronHill, that essence is about elegant simplicity. It’s about growing the best grapes you can and then stepping back, the same way a chef might use the best and freshest ingredients without overly manipulating them.

While we were there, we sampled some excellent Primitivo (or Italian Zinfandel), and some bold Cabernet, which they produce on their eight acres of land. I particularly liked their 2015 Estate Primrose, a delicious low-alcohol (7.7%) rosé, which was much bigger and bolder than a typical rosé—so more appealing to red wine drinkers.

AronHill is one of only a handful of wineries that dry farm, which means that —rather than irrigating — they use “only what mother nature gives us,” Aron explains. “Our berries will be smaller with more concentrated fruit flavours and lower yields,” she says. And without watering, the vines are stressed, which means they will reach deep down to find their own moisture.

Unlike people, being stressed is good for grape vines. And while the grape vines may be stressed, sitting out on the patio at AronHill, with the sun streaming down, a bottle of Chardonnay and a delicious chicken Panini waiting to be consumed, and a panoramic view of the vineyards, it’s difficult not to feel relaxed.

Four Lanterns
http://www.fourlanternswinery.com/ (referring to its owners Steve and Jackie Gleason’s four daughters) is a little gem. Although it has only been open since 2014 and produces only about 1,400 cases per year, they have some excellent Rhône and Bordeaux style wines. There is also an historic vineyard cottage for rent. 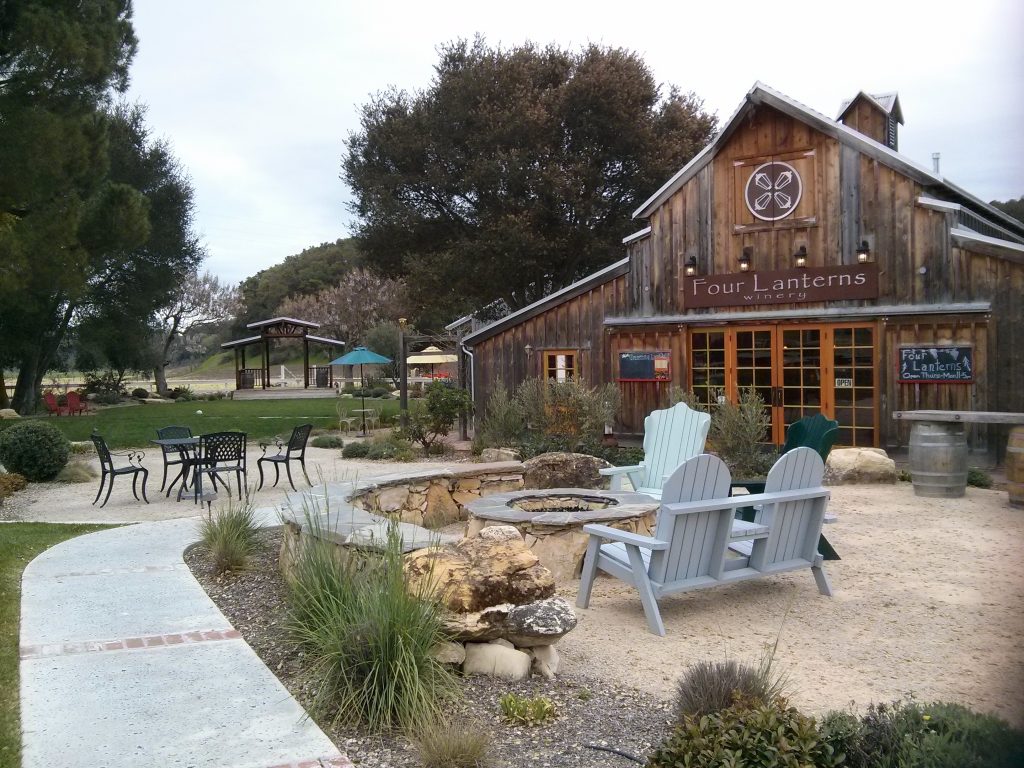 Saxum Vineyards
https://www.saxumvineyards.com/ focuses on producing Grenach, Syrah and Mourvedre-based blends, and won number one wine in the world from Wine Spectator in 2010.

No Responses to “Paso Robles: A Wine Region On The Rise”