Looking to Spice Up Your Travel Plans? Head to Sri Lanka for Bold Flavour and Health-Boosting Ingredients

The food is what I remember and miss the most about Sri Lanka.

The country has an abundance of all the things I love to eat: spices, curries, seafood and fresh produce. Some of the spices, such as the real cinnamon, are special to the island. As for the curries, you can have them at breakfast, lunch and dinner. And my husband and I did. 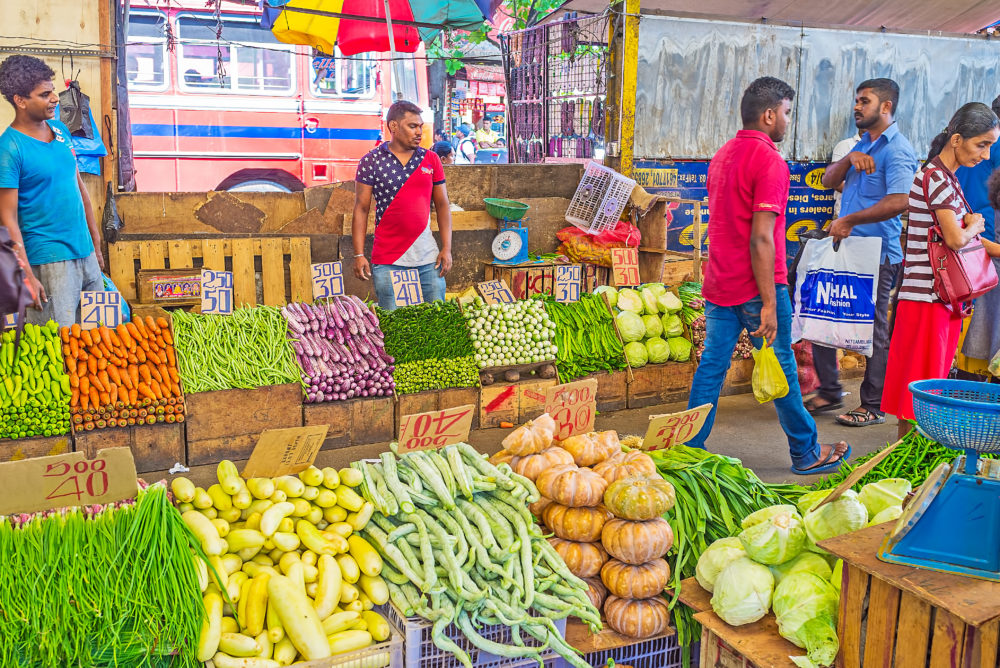 This small Indian Ocean island in the Bay of Bengal is just below the southeastern tip of India. It was undergoing a huge surge in tourism when it was hard hit by the Easter bombings in April of 2019. The likelihood of a repeat attack is slim to none, while the reasons to go are multiple.

It’s a country of great beauty with, in my opinion, some of the most fabulous and health-nurturing food on the planet.

During our stay at Serene Pavilions, a beautiful oceanside property near Wadduwa on the southwest coast, we went with chef Ruwan Chandana to the local market. 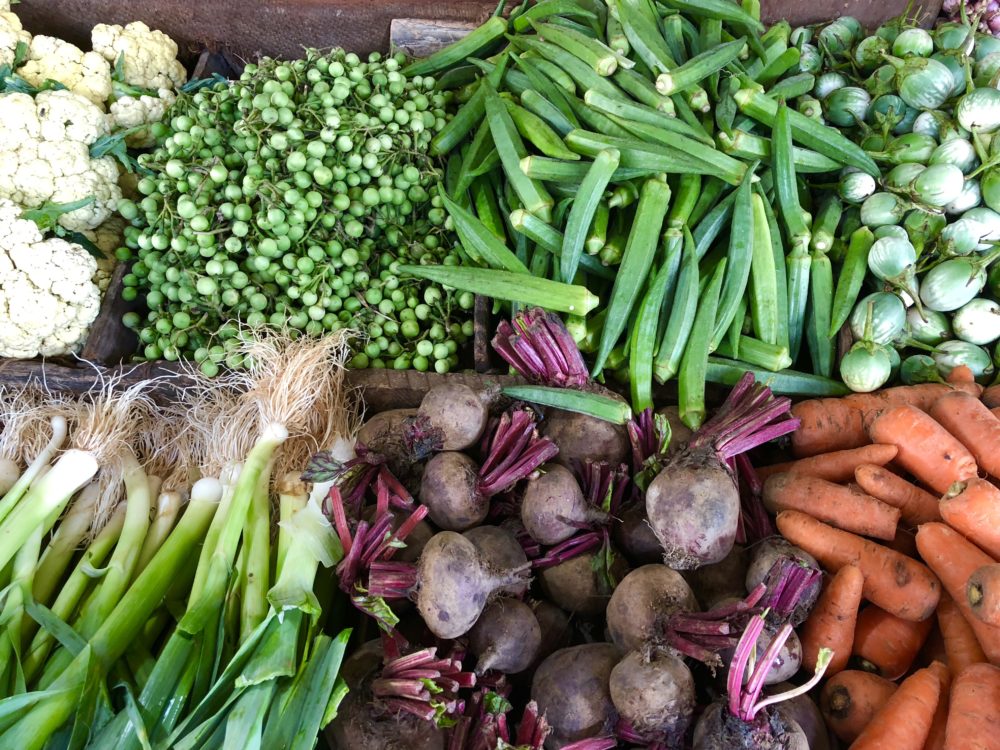 We were thrilled at the incredible array of fruits and vegetables, many of which we had not seen or eaten before. Among the tropical fruits were diul (wood apple), annona (soursop), bael fruit, durian, goraka, Ceylon oak, tamarind and multiple varieties of bananas. Vegetables included bitter gourd, snake gourd, breadfruit, tapioca root, grape-sized thibbatu melon (tiny wild eggplant), kankun (Asian water spinach), plantain flower and all kinds of herbs considered to have medicinal properties.

Chef graciously purchased whatever we were keen to try, including a selection of dried fish, fresh fish and bags of produce. On the way back we stopped at a roadside stand selling live lagoon crabs and added these to our purchases.

At the hotel, chef Ruwan cooked up what seemed like a miniature banquet for my husband and I. It was a spectacular meal and unlike any we had experienced elsewhere in the world. We soon found it was also typical of the meals we could enjoy while touring the country.

What you should eat in Sri Lanka

Basic rice and curry is a ubiquitous dish served up island-wide. The better hotels and restaurants serve a more sophisticated version, such as what chef Ruwan presented us. 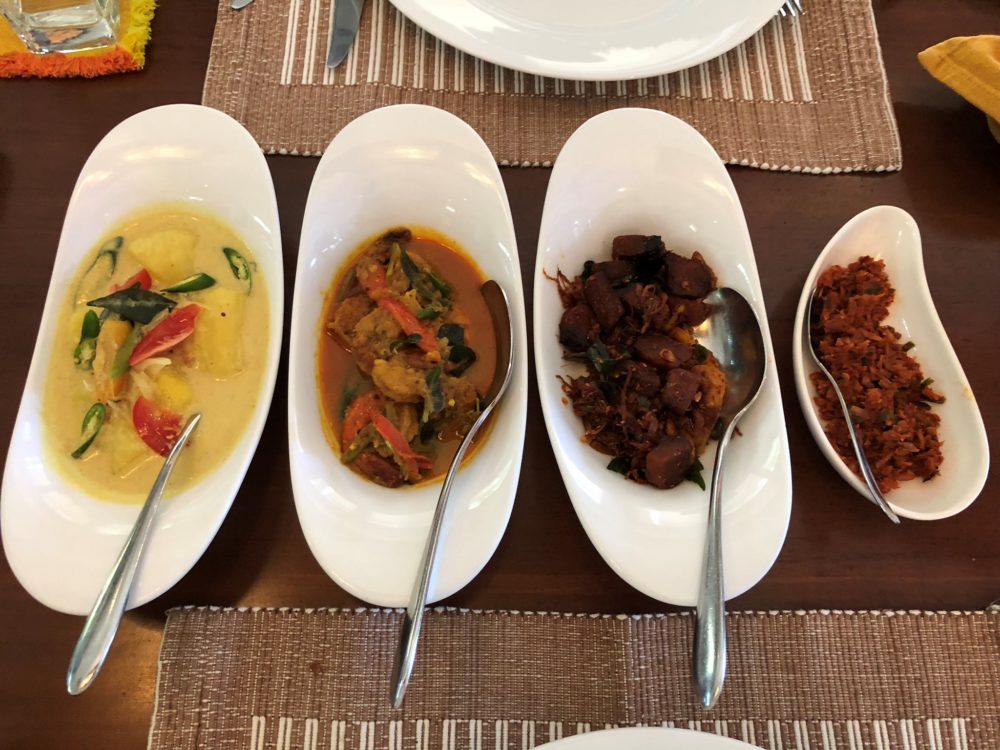 The dish is said to be inspired by the Indonesian nasi padang, transformed by the Dutch into rijsttafel (rice table) and introduced to Sri Lanka in the 18th century. It’s a serving of meat or seafood curry (fish, shrimp, lobster or crab), along with dhal (lentil curry) and often over a dozen stir fried and curry vegetable dishes. 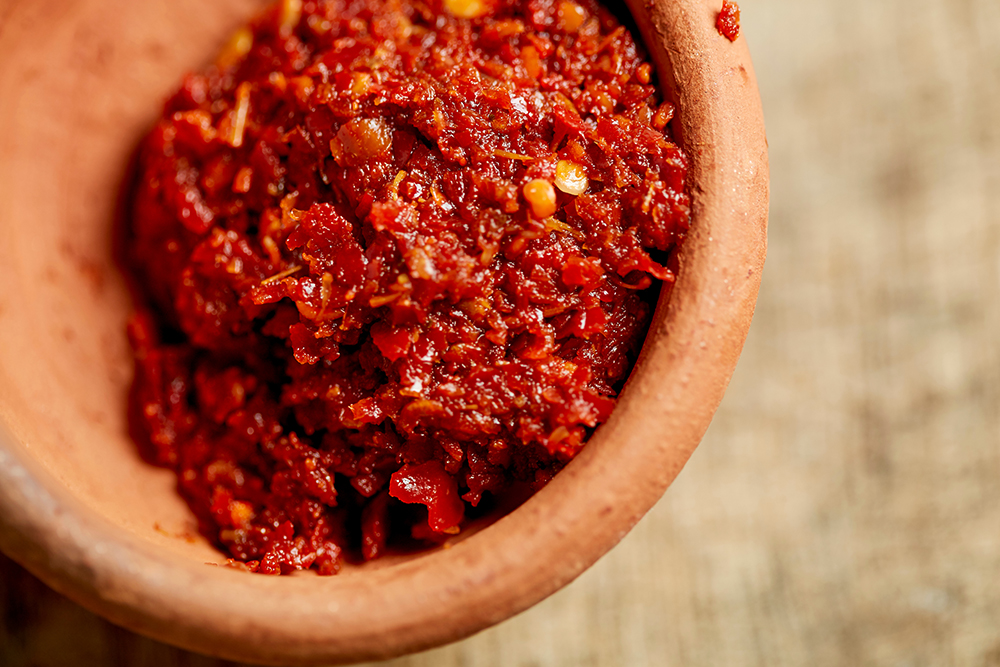 The island’s array of spices were introduced to Sri Lanka by traders from the Arab world and the country embraced them with fervour. A typical Sri Lankan breakfast, which we had many mornings during our stay on the island, is a coconut milk based curry with a fiery coconut sambol to mix in and spice it up even more. To soothe the heat, rice-based dishes such as hoppers or string hoppers accompany the meal.

A hopper is a wafer-thin, bowl-shaped pancake. The batter contains coconut milk, rice flour and a dash of palm toddy. Fry an egg in the middle of a hopper and you have an egg hopper. Tastier and healthier than any fast food breakfast sandwich. 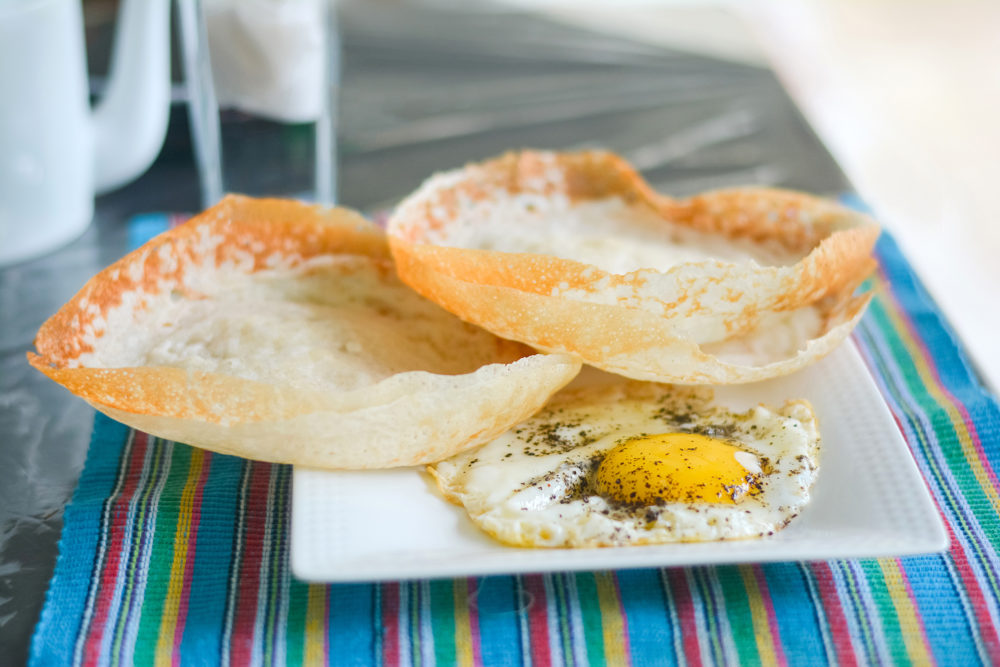 In the kitchen at breakfast, chef Ruwan showed us how to make string hoppers by squeezing rice flour dough through a sieve so it makes thin vermicelli-like noodles. The cooked noodles end up woven together like little nests.

Other rice dishes include milk rice, made with thick coconut cream and dense enough to cut into wedges, and pittu, made by steaming fresh rice meal with roasted and grated coconut in a bamboo mould so it comes out roll-shaped.

Over 200 varieties of rice

Sri Lanka boasts over 200 varieties of rice. My favourite was the nutritious, reddish-brown ma-wee rice, which I saw growing in rice paddies guarded by farmers sleeping in raised huts above. Low in carbohydrates and rich in protein and fibre, ma-wee tasted nutty and wholesome. It has been proven to have a 25-30% lower glycemic index (GI) than other common rice varieties. Locals told me that the queens of Sri Lanka loved ma-wee for its properties that helped them maintain a trim, shapely figure.

This heirloom variety of rice unique to Sri Lanka is time and labour intensive to grow and harvest. According to the Slow Food Foundation, only about 20 or so smallholder groups grow the heirloom rice today. It’s a pity it’s not more widely available as it’s said to minimize the effects of diabetes, improve bladder functioning and help reduce the side effects of alcohol.

Another health-boosting food available at breakfast is the herbal soup kola kanda. Made from brown or red rice, coconut milk and herbal leaves such as gotukola, penela and hathawariya, it’s taken on an empty stomach prior to tucking into a meal.

Served hot with a piece of jaggery (palm sugar) it’s said to be particularly good for those with arthritis. Every time I had it I felt supercharged with health and vigour. The herb gotukola is known for its healing and anti-inflammatory qualities. It is also thought to improve memory, anxiety and depression.

One of the most health nurturing spices on the island and in the world is cinnamon verum (real cinnamon). It’s commonly known as Ceylon cinnamon of which Sri Lanka is the globe’s major producer. 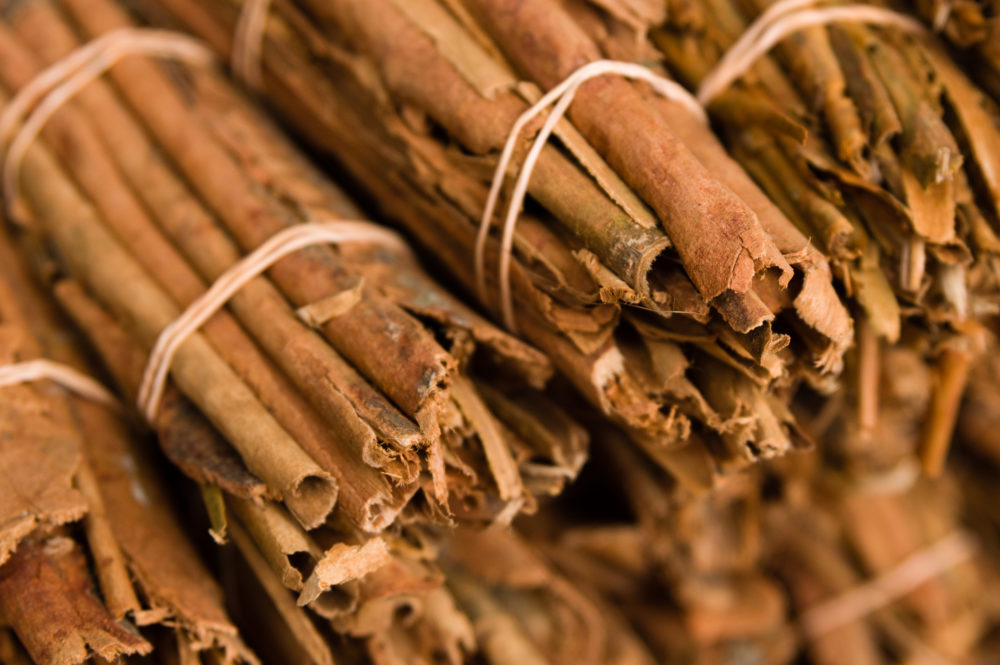 Sri Lanka was formerly a British crown colony known as Ceylon, a name it kept for nearly a quarter-century after independence. Hence the name of its cinnamon. Most of what we get in Canada is cassia cinnamon, a related species.

Sri Lankans harvest the cinnamon from the bark of a native evergreen tree. The active ingredients of the bark contain antiseptic, antiviral, antibacterial, antifungal and antispasmodic properties. Sri Lankans have used it for thousands of years for medicinal purposes.

Impressive health benefits include lowering blood sugar levels and reducing insulin resistance, contributing to healthy heart function, boosting the immune system and being anti-inflammatory. Cassia cinnamon contains coumarin which can be toxic to the liver if taken in large amounts or over a long time. Ceylon has much less coumarin in it which makes it safer.

The majority of the cinnamon plantations in Sri Lanka are near the historic seaside city of Galle on the southwestern tip. Our driver Anton took us by cinnamon plantations, stopping on the way to pick up a handful of cinnamon bark and foliage at the roadside which he crushed to let us inhale. The distinctive aroma of the spice was intoxicating.

Even the liquor here was special. They make a spirit called arrack from the distilled sap (toddy) of coconut palms. It’s believed to be one of the oldest spirits in the world.

To collect the sap, a tapper climbs to the top of the palm and taps into the flower. Tightropes connect a network of interlinked coconut trees called an athura. Toddy tappers use this to walk from one treetop to the next. They fasten containers to the flower stump to collect the sap, much like we do when we tap maple trees, but done sky high.

They ferment and distill the collected toddy into arrack. The result is delicious, special and unique. As is most of what you get on the plate and in the glass on this verdant island.

The late food and travel writer Anthony Bourdain described the taste of arrack as “a marriage of bourbon and rum, but with a stronger, burning kick and a mysterious bouquet.”

I don’t believe we’ve done any studies on its health benefits. But the best quality arracks contain just two ingredients–coconut flower sap and water. That’s as pure as a spirit gets. 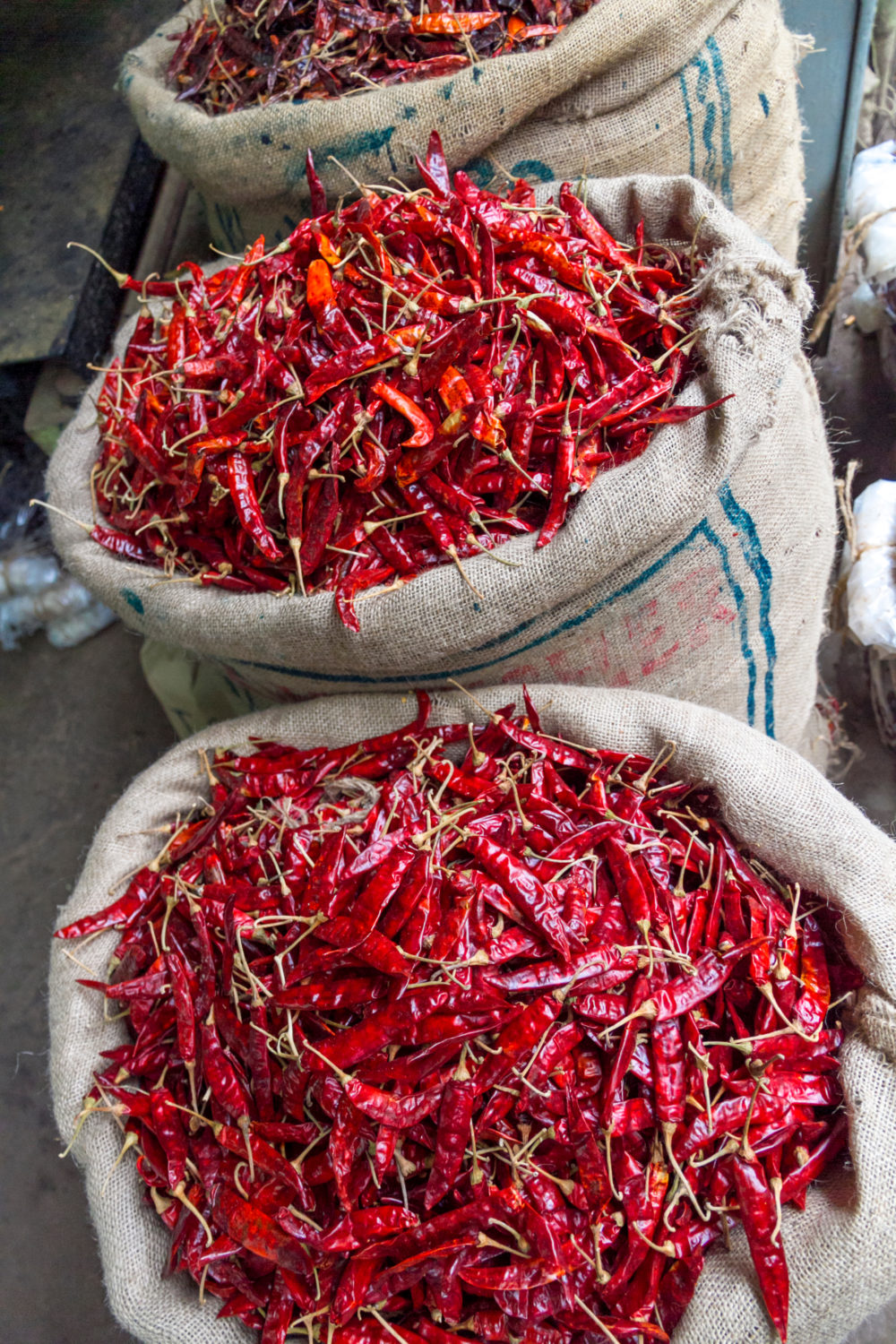 By the end of my trip, I knew that it was what and how I ate that infused me with health with every bite and sip. Ancient food habits in Sri Lanka were based on Ayurvedic practices which emphasized a balanced and nutritious diet. Those habits continue today at every meal.

Ayurveda is a wellness practice that originated in India and is about 5,000 years old. The main theme is keeping the body healthy and preventing the onset of diseases by sane and rational living. The word “Ayurveda” is a combination of two Sanskrit words. One means life (Ayur) and the other science (Veda). Therefore “the science of life.” The Ayurvedic diet focusses primarily on whole or minimally processed foods and practices mindful eating.

According to Ayurveda, each meal should contain six flavours: sweet, sour, salty, bitter, astringent and pungent. The diet advises eating lots of organically grown vegetables and fresh fruits, fresh grains and spices. Dishes should be varied and diverse. The typical Sri Lankan meal includes rice with up to twelve different sides of curried vegetables, meats and seafood. There’s also a mix of hot and cold energies to the meals. Such as pairing spicy dishes with cooling, coconut cream-based ones.

How far we have diverged from this practice in most modernized countries. How close they have stayed to it in Sri Lanka. How I dream of those meals.

Margaret is an international award-winning wine, spirits, food, spas, golf and travel writer. She is the bi-weekly culinary travel columnist (Global Gourmet) for Travel Industry Today, the spirit columnist for WineAlign, and golf and travel columnist for Kawarthas Magazine. She spent 16 years writing feature articles, wine critiques and culinary travel columns for the National Post, she wrote the spirit and cocktail columns for Zoomer magazine and for 6 years was the spa columnist for Best Health. She was the wine and drink columnist for Toronto Life and Chatelaine for over two decades. She is a founder and first president of the Wine Writers Circle of Canada. She has served as an expert witness in several wine disputes, and participated as a wine judge in global competitions in Canada, Italy, New Zealand, France, Austria, Australia and on. Margaret constantly travels the world in search of the next great story or experience.

No Responses to “Looking to Spice Up Your Travel Plans? Head to Sri Lanka for Bold Flavour and Health-Boosting Ingredients”