Believing in Magic in Miami

If you’ve ever caught an episode of the popular Netflix series Bloodline, you get a sense that there’s something a bit subversive about the Florida Keys archipelago.

Maybe it’s the scorching heat, the swaying coconut palms, or the fact everyone is tanned, fit and near nakedness. But this small concentration of islands, off the coast of South Florida, is a bit of a dreamer’s paradise. 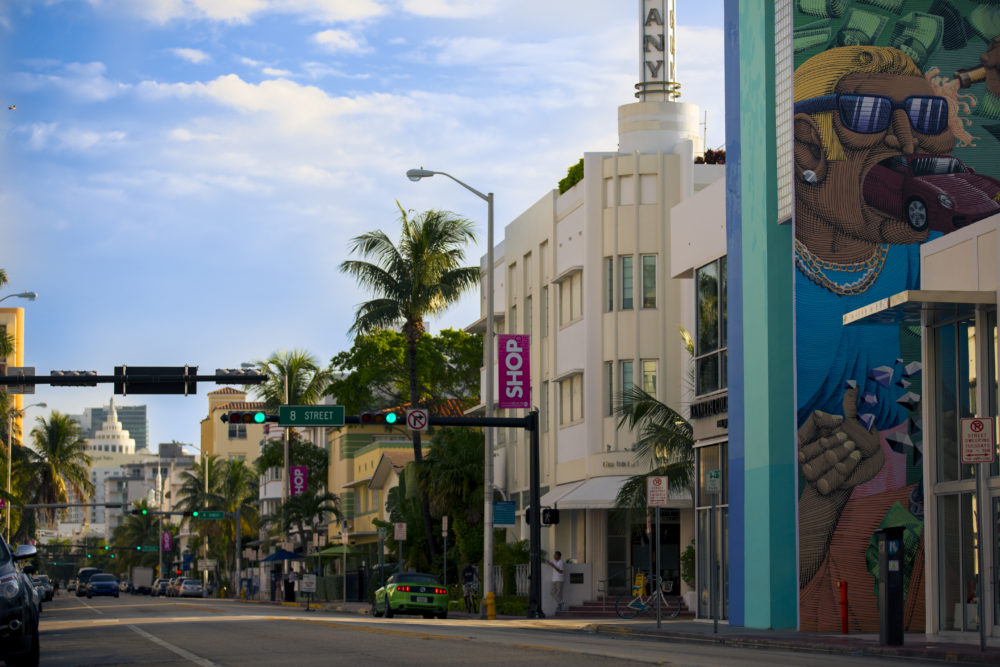 Miami Beach, a mere 15 miles away, is no exception to this rule. At Florida’s southeastern tip, what makes up this little slice of heaven and heat is a frenetic mix of art, Cuban culture, great food, booming nightclubs and chic surfside hotels, all of which is framed by a storied Art Deco influence.

People like to have a good time here—a really good time. However you define your own version of fun, you can expect that you will get a wee bit carried away once you’re in the fold of this dynamic island city. The “Magic City” has a way of taking over, and along with it, a few inhibitions, too. 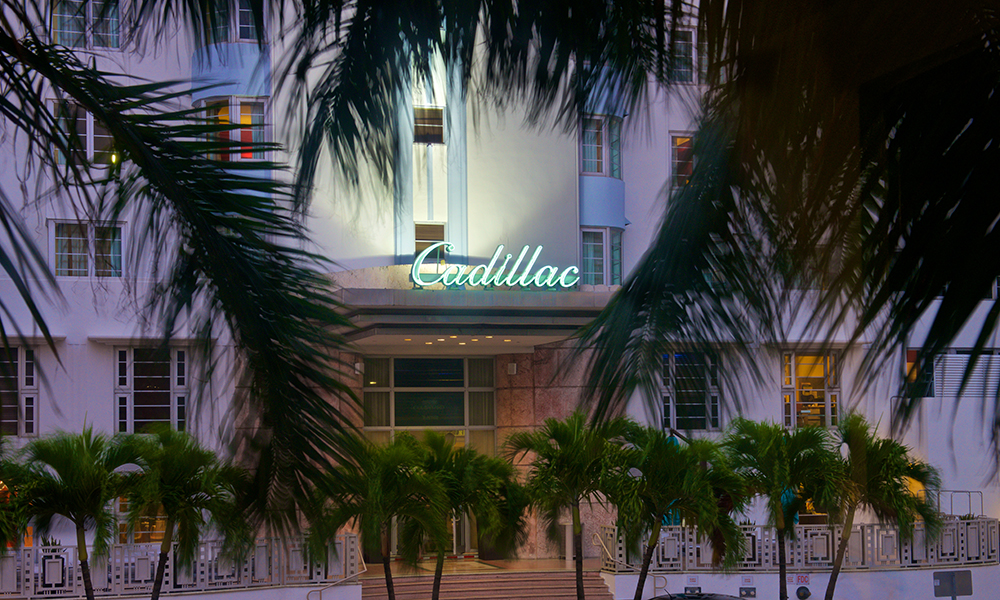 Originally designed in the 1940s by revered architect Roy France, the property is situated in the epicentre of Miami Beach, on the bustling strip of Collins Avenue, an artery carved out parallel to the Atlantic Ocean and home to bohemian beachfront estates, luxe boutiques and celebrity restaurants.

Having recently undertaken a major overhaul, the newly minted luxury hotel takes design inspiration from the Mediterranean and, perhaps most romantically, the spirit of the European Riviera.

The foyer, at once light, airy and contemporary, riffs off this aesthetic, while staying true to its Art Deco roots, with textured palm-print ceilings, lush tropical greenery and a certain kind of glamour, with elegant white-washed walls. 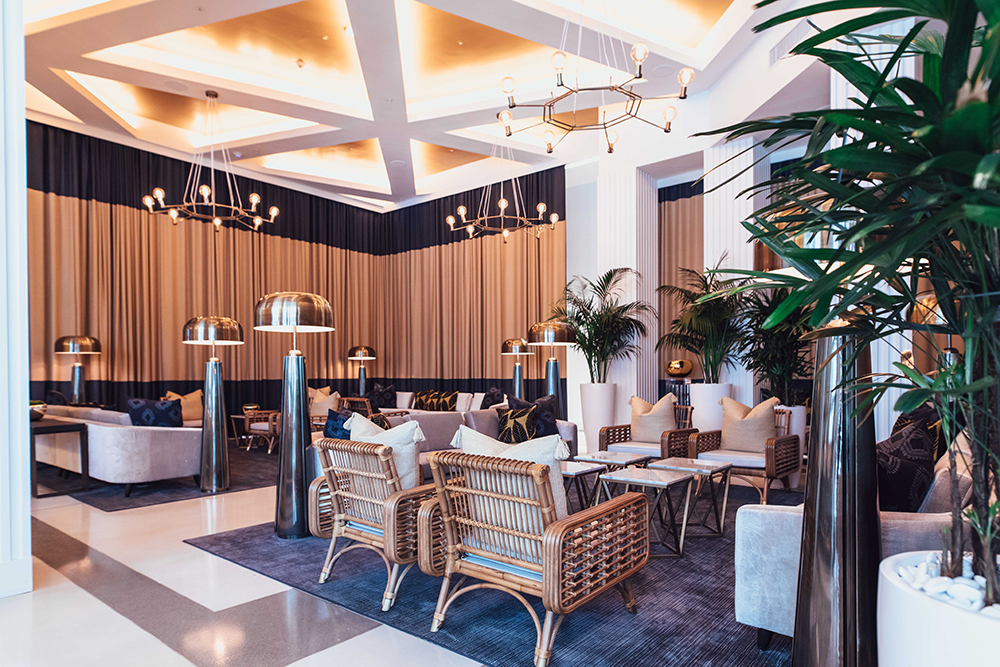 As my feet cool on the marbled floors, I take a peek inside the Lobby Bar, a sexy, dim-light space with floor-to-ceiling, ochre-coloured draperies, low-slung rattan seating and a spectacular golden-lit bar which, I’m told, boasts the most extensive collection of rosé on all of Miami Beach, as well as some of the world’s finest liquors and libations.

As if by happenstance, it’s at this moment a convivial concierge whispers in my ear that this little bar gets moodier as the sun begins to dip into sunset, and I get that sense when I take in an amorous couple sitting at the bar, lingering over conversation while the bartender shakes out some cool cocktails: she in a flowing designer caftan, him with a glowing tan and the gold jewellery to match. It’s barely 11 a.m., but no mind. They’re setting a pretty enticing scene. 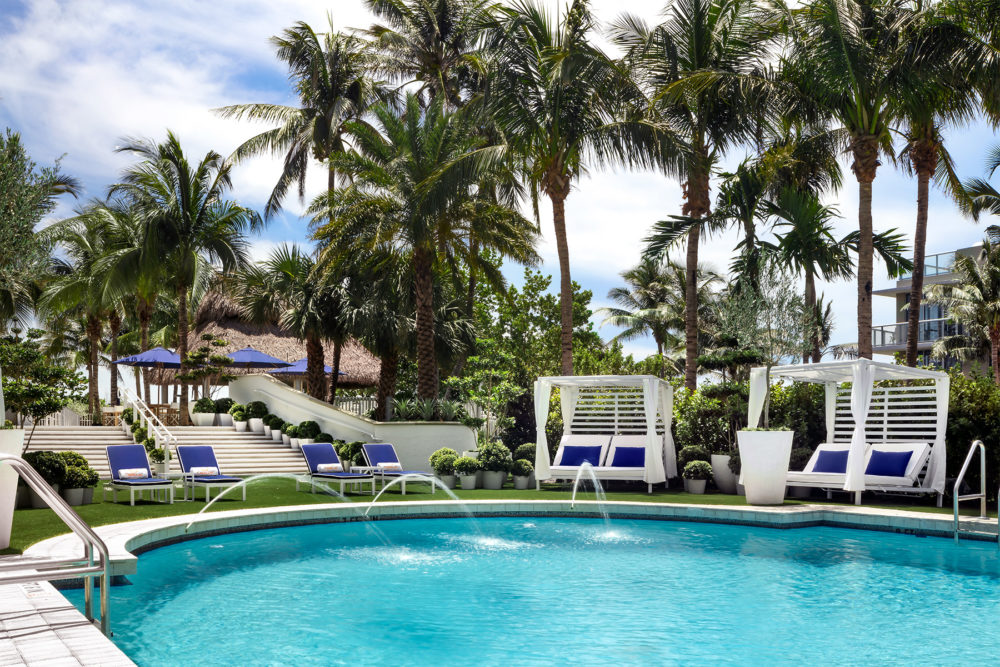 Meanwhile, outside boasts an even deeper hedonistic vibe. Minutes away from direct beach access, guests are also steps away from two inviting pools. Pink flamingo floaties sway in the sparkling waters, while guests lounge in private, navy-striped cabanas, or dance to the low thumping house music that plays across the green turf grounds and around the beach-chic palapa, Bungalow by the Sea.

At the seaside raw bar, feast on fresh lobster, oysters or the catch of the day. All of which pairs well with the salty sea air and sounds of crashing waves nearby.

If you’re able to move outside of the idyll of your hotel (and admittedly, that can be hard to do), you would be remiss if you didn’t equally embrace the city’s passion for art. 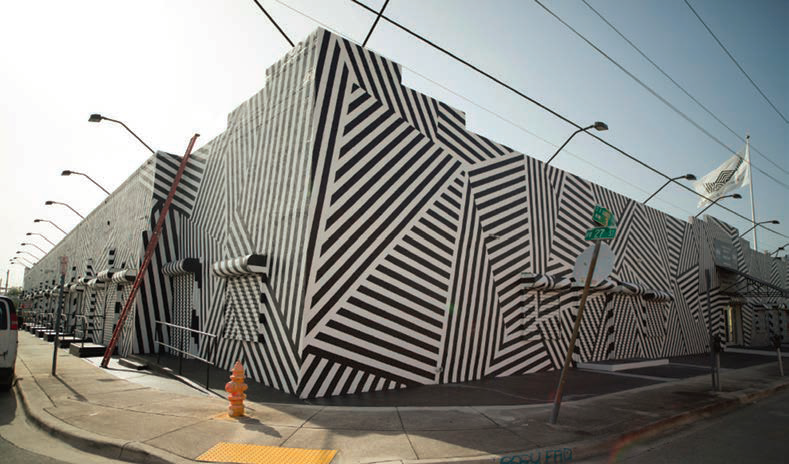 The Wynwood Walls is a great place to start. Developed in 2009 by renowned community revitalizer, the late Tony Goldman, this former derelict warehouse district became the canvas for some of the city’s greatest street art and graffiti. Touted as a “Museum of the Streets,” curation was originally co-led by Goldman as well as Jeffery Deitch, now the museum director of MOCA Los Angeles.

What you can expect is a jaw-dropping exhibition of 80,000 square feet of walls covered in a riot of colour and abstraction from over 50 artists. Art Basel this is not, and that’s a good thing. There’s something more primal and more electric about the art scene here.

Yes, expect a lot of roving hipsters and some incessant Instagram selfies. But anytime gentrification happens in a city, they often come along with it.

Book your private luxury yacht (available via Cadillac Hotel & Beach Club’s Signature Services, part of Autograph Collection Hotels) and sail through the city’s crystalline waterways and sandbars, taking in views of the sprawling celebrity mansions that dot the landscape.

Valet service takes care of your Lamborghini, while you take your walk amongst koi ponds and fountains. Then, dip into the legendary designer boutiques—Alexander McQueen, Chanel, Etro and Gucci—before you hit up Jewellers Row: a line of Bulgari, Harry Winston and Chopard boutiques you must be buzzed into to gain access.

Make sure you’re at Le Zoo, an outdoor French brasserie, for happy hour. It has all the St. Tropez feels and makes #roséallday feel wildly appropriate for a Tuesday afternoon.

Maybe it’s their take on unique, plant-based cuisine, or the fact Pharrell Williams has dined there (and shared his meal via a live Instagram video to his 11 million followers), but Planta South Beach, the second outpost from the original restaurant located in Toronto, has become one of the buzziest places in South Beach. 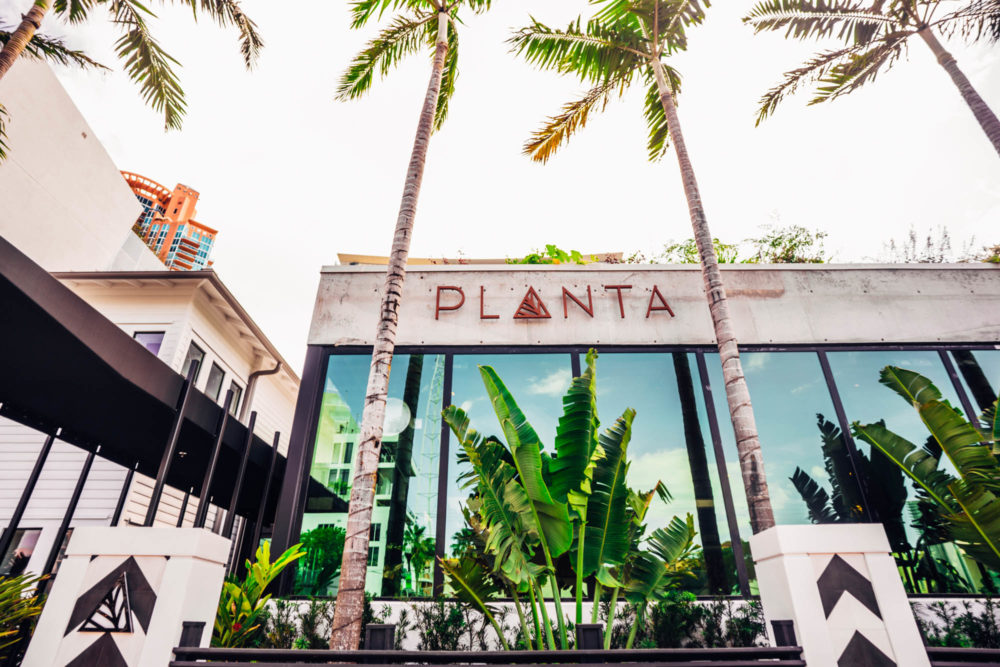 Frankly, it’s with great reason. Never has vegan food been so appetizing, nor cocktails so inventive. Chef David Lee serves innovative plates of what you think is the meatiest cheeseburger and heart of palm crab cakes, so fresh and flaky you feel like they were sourced straight from the sea.

Herbs and vegetables are hand-picked from the rooftop garden and used in most plates and some cocktails. Speaking of, the Charcoal Bourbon Sour is a heady “must”. As is the playful Shiso Bubbly: vodka blended with shiso leaf, lime, grape and a splash of prosecco. 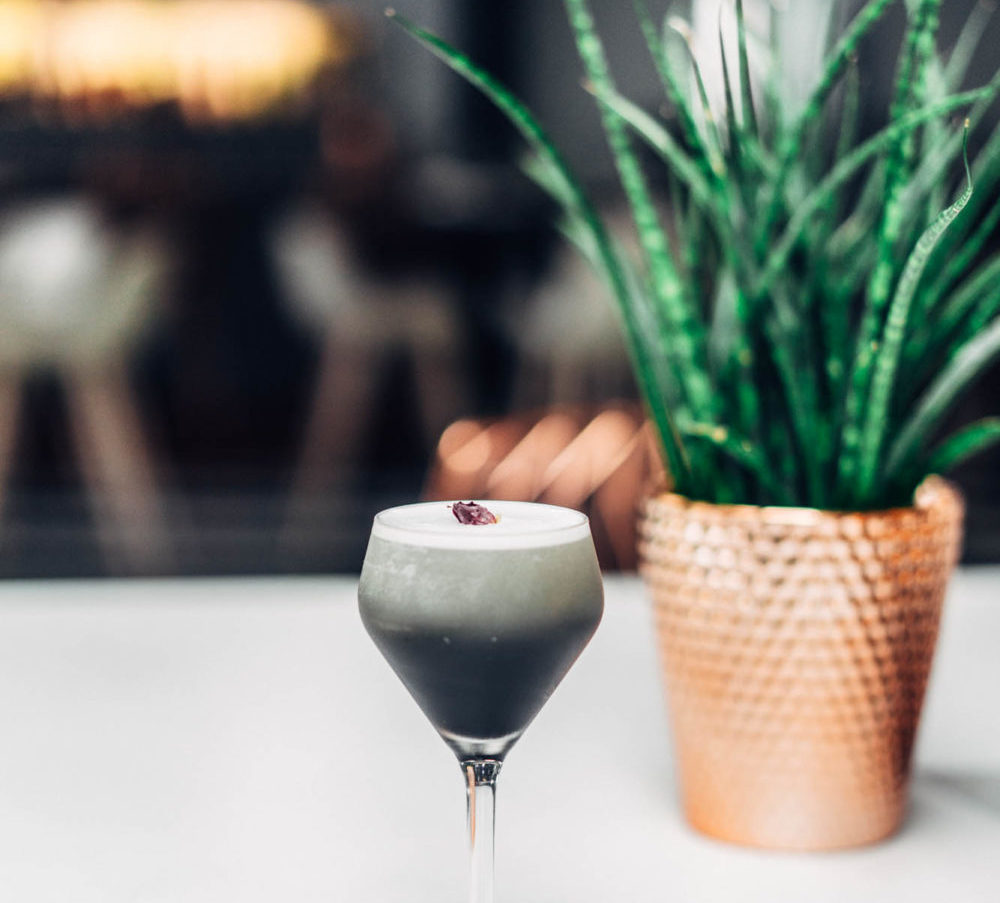 This is the place to while away an evening, or use as the starting point to an indulgent Saturday night in South Beach.

Kiki on the River

After a night of dancing, one must regain their sense of self over a lovely brunch, and Kiki’s is just the fix. Based on the spirit of the Greek Islands, this upscale Aegean restaurant is right on the river, offering up views of docked boats and miles of blue sky. 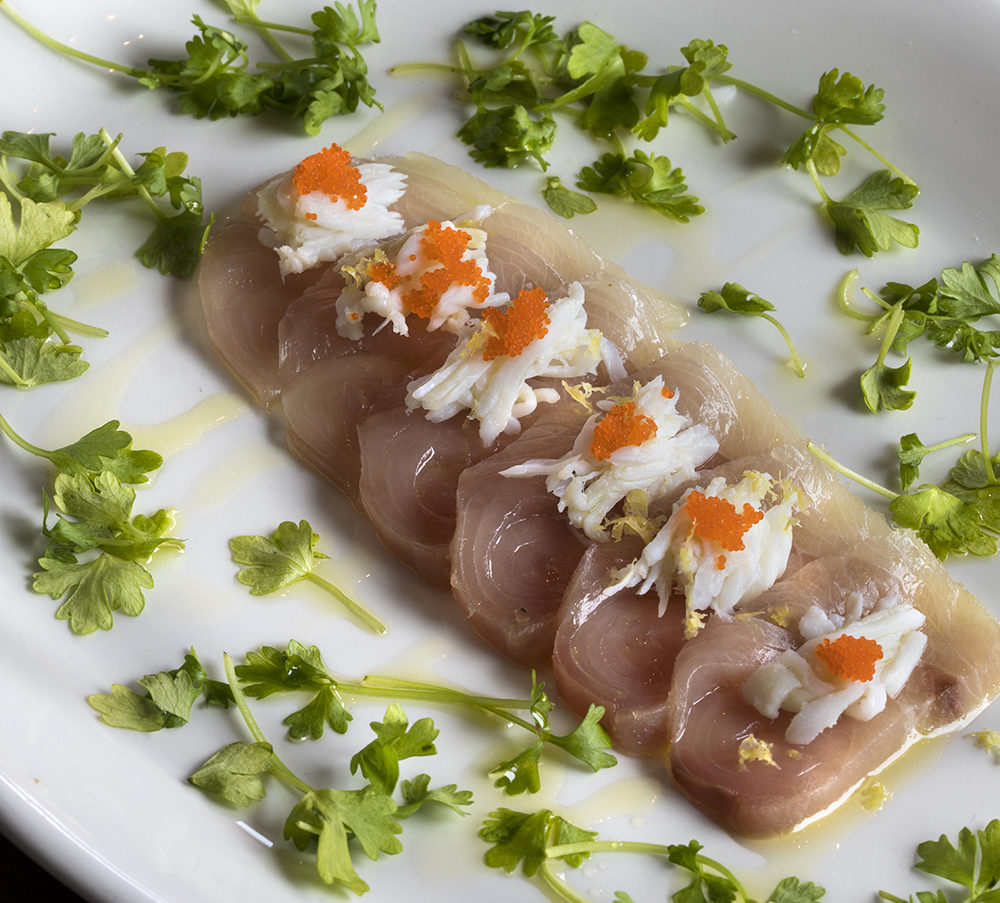 Michael Jordan is a fan, and you will be too once you glance at the menu. It’s full of classic dishes with a modern twist of Asian and local Miami flavours.

There’s truth in saying this is the city that never sleeps (kind of like that other city) in that all-day parties reign supreme here—especially on Sunday afternoons. Banking on the city’s infamous club scene, Kiki’s is known to go down on a Sunday afternoon with beats, bubbly and patrons dancing freely on tabletops.

One Response to “Believing in Magic in Miami”