Mexico is filled with fascinating places to visit and the state of Puebla is no exception. Home to rich history and traditions, countless cultural attractions, some of the best food you’ll find in the country, and a UNESCO-listed state capital, Puebla is well worth discovering.

PUEBLA: CLOSER THAN YOU THINK

The state of Puebla is located in east-central Mexico, just a two-hour drive from Mexico City. The best part is, the region is now much more accessible out of Canada, thanks to multiple flight options to Mexico City, including WestJet’s new direct service and their codeshare agreement with Aeroméxico that allows connecting flights to Puebla. Comfortable and economical transportation with the ADO and Estrella Roja bus lines is also available directly from the two terminals at Mexico City’s international airport to the Puebla station known as 4 Poniente.

Culture is the name of the game when it comes to Puebla. In fact, the colonial centre of the state capital (also called Puebla) was designated a UNESCO World Heritage site in 1987 for its an abundance of well-preserved historical buildings, stunning Baroque architecture and ornate cathedrals. The area is also well-known for several cultural festivals, including Cinco de Mayo, which has its roots in Puebla, which commemorates the Mexican army’s 1862 victory over France at the Battle of Puebla 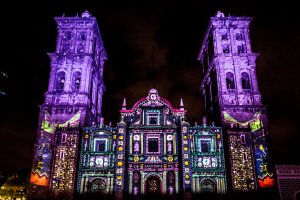 Foodies take note: Puebla is an important region when it comes to the culinary history of Mexico. This is where mole poblano, a smooth thick sauce made from various chilis, fruits, nuts, spices and chocolate, originated. Besides the mole, you’ll also want to try tacos arabes that are unique to Puebla. The Lebanese influence in this city can be found in these tacos made with marinated pork and served in a pita-like bread rather than the traditional corn tortilla. If you have a sweet tooth, Calle de los Dulces (“sweet street”) is not too be missed. This colourful, three-block-long street is full of vendors and shops offering confections in any shape or size as well as delicious baked goods. Fill a bag with a variety of the Mexican candy and be sure to include camotes, which are the city’s specialty candy made from sweet potato. 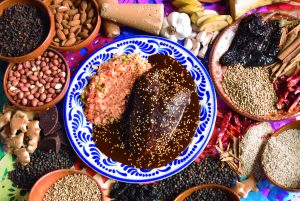 The capital of Puebla was founded in 1531 by the Spanish as Puebla de Los Angeles, eventually leading to the growth of the surrounding region. It’s also important to note that the Magic Town of Cholula is considered to be the oldest continually inhabited city in Mexico, and also home to one of the largest pyramidal bases in the world. Puebla is also home to the first public library in the Americas, the Bibliotheca Palafoxiana, which is said to be the only remaining library from the Spanish Colonial period and containing more than 43,000 volumes.

Mexico’s Ministry of Tourism has designated over 100 sites throughout the country as Pueblos Mágicos (Magic Towns), all of which feature notable natural, historical or cultural wealth. Puebla is home to nine such towns, all with their own unique charms just waiting to be discovered. These include Atlixco, Chignahuapan, Cholula, Cuetzalan, Huauchinango, Pahuatlán, Tlatlauquitepec, Xicotepec, and Zacatlán.

If you’re looking to take home a special souvenir from your visit to Puebla, Talavera pottery is one of your best bets. The hand-painted tin-enameled earthenware pottery has a 500-year history and makes for a beautiful decorative accent, whether in the form of tiles and water jugs, or bowls and vases. Visit the Mercado de Artesanías del Parián to stock up. 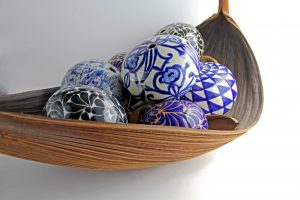 No Responses to “Discover Puebla”